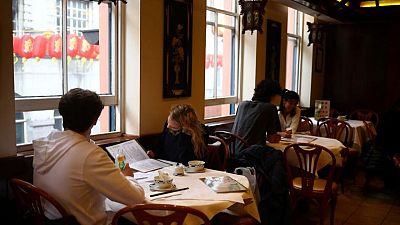 LONDON -British diners flocked to restaurants over the past week after lockdown restrictions lifted across most of the United Kingdom, and the number of furloughed workers fell to its lowest since the start of the year, weekly official data showed.

The figures add to signs that economic life is returning to normal as lockdown restrictions ease following the roll-out of COVID vaccines which now cover more than 70% of the adult population.

Britain’s government closed pubs, restaurants and non-essential retailers at the start of the year due to the spread of a more infectious variant of COVID, and significant reopening only started in late April.

Restaurants in England, Scotland and Wales were allowed to serve customers indoors from May 17, after several weeks when outdoor dining was allowed.

Bookings in the first full week of opening, ending May 24, were 32% above their level in the same period of 2019, before the pandemic, according to data from booking website OpenTable produced for the Office for National Statistics.

This was an increase of 59 percentage points from the previous week, which only included the first day when restaurants reopened for indoor dining.

Aggregate spending on credit and debit cards was 96% of its average for February 2020 in the week ending May 20, down fractionally from the week before, according to data from the Bank of England which is not adjusted for seasonal effects.

The proportion of employees on furlough fell to 8% for the period May 3-16, just before the latest lockdown easing, down from 10% in the previous two-week period and equivalent to about 2.2 million staff, the ONS said. Job adverts have also risen above pre-pandemic levels.

Britain’s government aims to lift most remaining lockdown restrictions in England on June 21, which would increase capacity at many hospitality venues. However, scientists have warned that the spread of a new variant of COVID first identified in India could delay this.