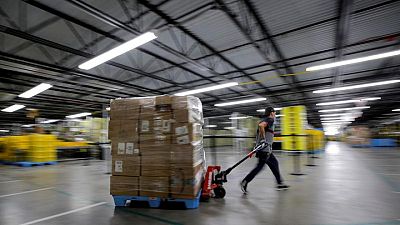 <p><body> <p>By Ross Kerber and Jeffrey Dastin</p> <p>(Reuters) – After a failed union-organizing effort at Amazon.com Inc last month, labor advocates are looking to the company’s annual shareholder meeting on Wednesday, hoping for a chance to get a worker on the board of directors of the world’s largest online retailer.</p> <p>A resolution from shareholders including nonprofit Oxfam America calls for Amazon to consider nominating an hourly employee to its board. The proposal picked up valuable, and rare, backing from top proxy adviser Institutional Shareholder Services.</p> <p>Amazon’s board has recommended that shareholders reject the proposal, and very few U.S. companies give workers a board seat. Still the concept is gaining attention as investors focus on income inequality and social justice issues.</p> <p>Amazon <span class="caps">CEO</span> Jeff Bezos said in a letter to shareholders last month that the company needed “a better vision for our employees’ success.” Bezos controls about 14% of Amazon’s shares, making investor-led reforms an uphill battle.</p> <p>During the labor organizing campaign, some staff had aired grievances including fatigue from warehouse work and mandatory anti-union meetings. Still, employees at the Bessemer, Alabama warehouse ultimately rejected forming the company’s first U.S. union by a more than 2-to-1 margin. </p> <p>Jennifer Bates, a Bessemer employee who supported the union effort, will present the resolution at Amazon’s annual meeting, according to Oxfam.</p> <p>The proposal calls for directors to consider hourly associates in their initial list of new board candidates. Bates is expected to say Amazon has not listened to workers’ health and scheduling concerns and that having a board seat would be “transformative,” according to prepared remarks shared with Reuters.</p> <p>“It would send a signal that our voices matter,” Bates says in the remarks.</p> <p>Amazon referred Reuters to the board’s statement against the proposal, which said directors already were focused on employees’ pay and benefits and workplace safety and culture. The company raised starting pay to $15 per hour in the United States more than two years ago.</p> <p>“We have also long recognized the importance of employees’ participation in our decision-making processes,” the board’s statement said.</p> <p><span class="caps">ISS</span> <span class="caps">SUPPORT</span> <span class="caps">MAY</span> <span class="caps">MOVE</span> <span class="caps">THE</span> <span class="caps">NEEDLE</span></p> <p>For the meeting, Institutional Shareholder Services (<span class="caps">ISS</span>) has backed eight other shareholder proposals contrary to the board’s wishes and recommended against approving executives’ pay, although it did recommend electing all 10 Amazon director candidates.</p> <p>Various countries including Germany have requirements for worker representation in boardrooms, but only a few U.S. companies have such representation including top airlines Delta Air Lines Inc and United Airlines Holdings Inc.</p> <p>While a number of Democrats in Washington have called for such representation, similar shareholder proposals have drawn little support at other U.S. companies.</p> <p>Proposals at Starbucks Corp in March and at industrial systems maker Woodward Inc in January each won only 7% support of votes cast, and others last year did not even fare that well. [nL1N2K93EL]</p> <p>A difference is that neither proposal this year had the support of <span class="caps">ISS</span>, whose backing can shift 15% or more of shareholder votes, according to corporate election specialists. </p> <p>In its May 13 report <span class="caps">ISS</span> noted the controversies Amazon faces over working conditions in its warehouses and stated that “having employee representation on the board could potentially provide the company with meaningful insights into its workforce’s needs.”</p> <p>Shareholder resolutions need not win majorities to lead to changes, since they show boards the mood of investors. Resolutions winning between 30% and 50% support still led to at least some changes two-thirds of the time, a recent study by BlackRock Inc found. </p> <p>The second-largest proxy adviser, Glass Lewis, has recommended investors oppose the director-candidate resolution, worried it could threaten the board’s independence and shareholder value.</p> <p>Courteney Keatinge, Glass Lewis senior director for <span class="caps">ESG</span> research who helped develop the recommendation, said the firm would expect Amazon to respond if the proposal wins more than 51%. She said via e-mail that “if it was not evident that the company responded or engaged extensively with shareholders on how to respond, we would probably have some concerns.”</p> <p/> <p> (Reporting by Ross Kerber in Boston and by Jeffrey Dastin in San Francisco; additional reporting by Jessica DiNapoli; Editing by David Gregorio)</p> </body></p>