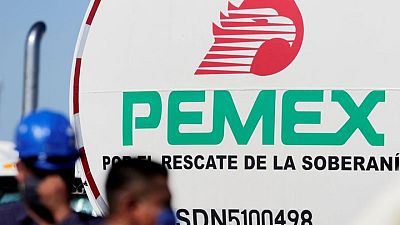 HOUSTON/MEXICO CITY (Reuters) -Royal Dutch Shell agreed to sell its controlling interest in a Texas refinery to partner Petroleos Mexicanos (Pemex) for about $596 million, the latest move by the European oil major to cut its global refining footprint.

The deal ends a 28-year partnership between Shell and Pemex, Mexico’s state-run oil company that processed up to 340,000 barrels per day of oil into gasoline and diesel. The deal was significantly revamped three years ago in a move to halve its purchases of Mexican crude beginning in 2023.

Mexican President Andres Manuel Lopez Obrador had complained this month the Deer Park, Texas, joint venture had not been profitable for Mexico, and said he was committed to “addressing this issue” without providing details.

In a tweet on Monday, Obrador praised the buyout that makes Pemex the refinery’s sole owner and gives it the first ownership of a plant outside of Mexico. The refinery, shipping docks and an adjacent chemical plant that Shell will retain ownership covers 2,300 acres outside of Houston.

Neither Obrador, nor the announcement of the sale indicated whether Pemex or another company would operate the U.S. plant.

“The most important thing is that in 2023 we will be self-sufficient in gasoline and diesel,” Lopez Obrador said on Twitter. “There will be no increases in fuel prices,” Lopez Obrador added in his tweet.

In 2018, Pemex struck a deal that allowed Shell to invest the refinery’s profits into an overhaul of the facility that allowed to process other suppliers’ crudes, said Gonzalo Monroy, a Mexico City-based oil analyst.

“They thought at Pemex at that time that they could allocate Maya crude to another market, but the market situation is very different now: Pemex has plenty of crude oil and fuel oil, and needs gasoline and diesel from the U.S. Gulf,” Monroy said.

Shell will retain control of the chemical plant that adjoins the 318,000-bpd Deer Park, Texas, refinery that sits along the Houston Ship Channel.

The sale comes as Shell is shrinking its refining and chemicals portfolio as part of a broader shift by oil majors to reduce their hydrocarbon footprint and shift to lower-carbon fuels.

On May 4, Shell disclosed plans to sell its 149,000-bpd Puget Sound refinery in Anacortes, Washington, to U.S. refiner HollyFrontier.