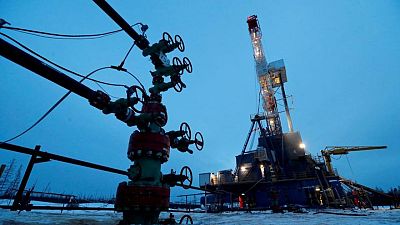 <p><body> <p>By Jessica Resnick-Ault</p> <p><span class="caps">NEW</span> <span class="caps">YORK</span> (Reuters) -Oil prices rose more than 3% on Monday as a demand bump fueled by <span class="caps">COVID</span>-19 vaccination drives gave traders optimism that the market can absorb any Iranian oil that would come on the market if Western talks with Tehran lead to the lifting of sanctions.</p> <p>A decline in deaths due to <span class="caps">COVID</span>-19 in India also bolstered expectations that oil demand could rise in coming weeks. </p> <p>Brent crude oil futures settled up $2.02, or 3%, at $68.46 a barrel, while July U.S. West Texas Intermediate ended at $66.05 a barrel, up $2.47, or 3.9%.</p> <p>Prices also got a boost on expectations that a new deal with Iran is less likely than it was last week, said Bob Yawger, director of Energy Futures at Mizuho in New York. </p> <p>“The Iranians and western powers cannot get the details worked out that will get this deal signed and delivered,” Yawger said.</p> <p>Iran and the U.N. nuclear watchdog are extending a recently expired monitoring agreement by a month, both sides said on Monday, avoiding a collapse that could have pitched wider talks on reviving the 2015 Iran nuclear deal into crisis.</p> <p>Former President Donald Trump withdrew the United States from the deal in 2018 and re-imposed sanctions.</p> <p>Even if large volumes of Iranian crude return to the market, it is unlikely to stall the drawdown in global oil stocks, said Stephen Brennock of oil broker <span class="caps">PVM</span>.</p> <p>“Additional supply from Tehran is poised to be absorbed by the market as a result of a vaccine-spurred surge in demand over the coming months,” he added.</p> <p>Goldman Sachs said the case for higher prices remained intact even with a potential increase in Iranian exports. Its new base case for an October restart still supports an $80 per barrel forecast for this summer, it added. </p> <p>“Even aggressively assuming a restart in July, we estimate that Brent prices would still reach $80 per barrel in fourth quarter 2021,” the bank said in a note.</p> <p> (Additional reporting by Noah Browning and Jessica Jaganathan; Editing by Marguerita Choy and David Gregorio)</p> </body></p>