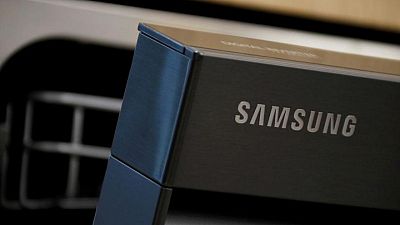 SEOUL (Reuters) -South Korea requested from the United States incentives such as tax deductions and infrastructure construction to ease the U.S. investment of Korean firms including leading chipmaker Samsung Electronics, its presidential office said on Friday.

South Korean President Moon Jae-in, in Washington for a summit with U.S. President Joe Biden, told a gathering of U.S. Secretary of Commerce Gina Raimondo, her South Korean counterpart and CEOs of Qualcomm, Samsung and other executives that both countries can benefit by strengthening supply chain cooperation.

Biden has advocated for support for the U.S. chip industry amid a global chip shortage that has hit automakers and other industries.

He met with executives from major companies including Samsung in April and previously announced plans to invest $50 billion in semiconductor manufacturing and research.

In February, documents filed with Texas state officials showed that Samsung is considering Austin, Texas, as one of the sites for a new $17 billion chip plant that the South Korean firm said could create 1,800 jobs.

There has been no new public documentation filed on the potential Texas chip plant application since March, the website for the Texas Comptroller of Public Accounts showed on Friday.

The U.S. Department of Commerce and the Korean industry ministry agreed on Friday that for continuous chip industry cooperation, policy measures such as incentive support, joint research and development and cooperation on setting standards, and manpower training and exchange are needed, the Blue House said.