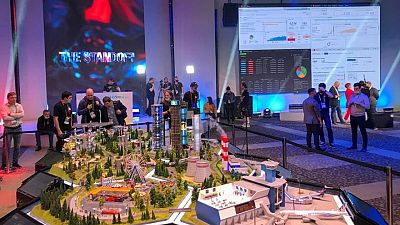 MOSCOW (Reuters) – Russian cybersecurity firm Positive Technologies is pressing ahead with plans for an initial public offering (IPO) next year, despite the imposition of U.S. sanctions in April that ban it from working with U.S. financial institutions.

The U.S. Treasury in April blacklisted Positive Technologies and other IT firms for supporting Russian intelligence services, which the company described as “groundless accusations”, while Chief Operating Officer Maxim Pustovoy said the blacklisting was based on “a misunderstanding and a mistake”.

The company wrote to the U.S. Office of Foreign Assets Control (OFAC) to lay out its position, Managing Director Denis Baranov told Reuters at a Positive Technologies-organised event on Thursday, but has yet to receive a response.

In an interview with Reuters, Pustovoy shrugged off the impact of sanctions on Positive Technologies’ business and said a plan to initially float around 10% of the company’s shares in 2022 was still in place.

“Around 97% of our clients are based in Russia, so the damage done to our U.S. business does not have a huge impact on revenue or growth,” Pustovoy said.

Russian firms that go public usually list in Moscow and abroad, with London and New York the most popular destinations. The sanctions ban any U.S. entity from working with Positive Technologies, a restriction that Russian banks can help bypass.

A representative of one of Russia’s largest banks told Reuters the bank was interested in working on the Positive Technologies IPO deal.

The United States has also accused Positive Technologies of using hacking conventions as recruiting events for Russian intelligence agencies, the FSB and GRU, a notion Pustovoy described as ridiculous.

This year’s Positive Hack Days took place on Thursday and Friday, with the main attraction pitting attacking and defensive hackers against one another to seize control of a miniature town’s systems.