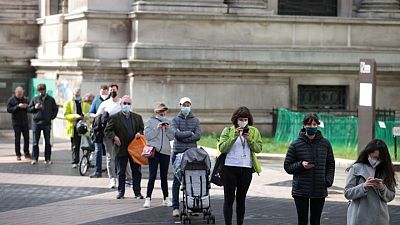 LONDON (Reuters) – Britain’s economy will grow much faster than expected this year as a fast-moving coronavirus vaccine programme allows businesses to re-open and lifts confidence, a Reuters poll found.

The country has suffered the highest COVID-19 related death toll in Europe, despite stringent lockdowns to try to contain its spread. But it has administered around 58 million coronavirus vaccine doses, including about 21 million citizens having had second shots.

On Monday, England further relaxed more of those lockdown restrictions, allowing cafes, bars and restaurants to reopen for indoor service and gatherings of up to 30 people permitted outdoors.

As much of the country’s dominant service industry was at least partially closed last quarter the poll predicted the economy contracted 1.5% in that period. But the reopening meant it would expand 4.1% this quarter, better than the 3.5% projected last month.

“We are revising our GDP growth forecasts. However, this is largely a revision to the projected timing of the recovery, not the extent,” said Elizabeth Martins at HSBC, whose Q2 forecast went from 2.9% to 4.6% while the Q3 forecast was revised down.

“Just as the fastest weight loss often happens in the early stages of a diet, it may be that the easiest part of the economic rebound is in the immediate aftermath of reopening – as was the case last summer.”

The economy will be back to its pre-pandemic size within a year, 21 of 27 respondents said – including two who said within six months. Six said it would take 1-2 years and none said longer.

Like its peers, the Bank of England slashed borrowing costs and restarted its quantitative easing programme at the height of the pandemic last year to support an economy suffering its deepest downturn in centuries.

Bank Rate now stands at a record low of 0.10% and medians showed it would be 2023 before that rises. Less than a handful of respondents had an increase pencilled in before the end of 2022 and none expected any rise before July next year.

That was despite predictions in the poll for inflation to exceed the central bank’s 2% goal towards the end of this year and into 2022.

Inflation more than doubled to 1.5% in April, official data showed this week, and 18 of 19 respondents to an additional question said risks to their inflation forecasts were more to the upside.

But BoE Governor Andrew Bailey said on Tuesday the Bank expected rises in prices above target would be transitory and the rate would return to around 2% over the medium term.

“We largely concur with this assessment, especially given a likely increase in unemployment following the end of the furlough scheme in September depressing any potential wage pressures,” said Ellie Henderson at Investec.

“As a result we do not believe that there will be a hike in Bank Rate until mid-2023.”

(For other stories from the Reuters global long-term economic outlook polls package:)