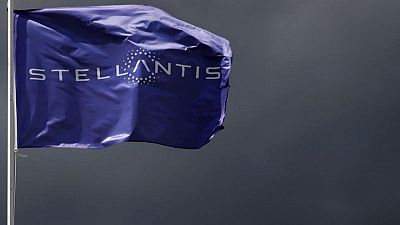 MILAN (Reuters) -Carmaker Stellantis will completely restructure its European dealers network as it seeks to adapt to changes in the industry brought by electrification, including a boom in online sales, and achieve promised post-merger synergies.

After Stellantis was formed at the start of the year by the merger of Fiat Chrysler and Peugeot maker PSA, Chief Executive Carlos Tavares has taken action on several fronts, from cost-cutting to technology partnerships.

The world’s fourth largest carmaker has promised more than 5 billion euros ($6.10 billion) in annual synergies and said 7% of them would be driven by savings on sales operations and general expenses.

Stellantis will end all current sales and service contracts with European dealers for its 14 brands, with effect from June 2023, it said in a statement seen by Reuters on Thursday.

“Customers will benefit from a multi-brand and multi-channel approach with a wider range of services,” the group said.

Current contracts will remain valid for two years, but will be issued with termination notices at the end of this month, while the new distribution and servicing network will be selected shortly thereafter, based on objective key criteria and factors, it added.

“We are going to work with representatives of networks to establish factual criteria on which we are going to build in 2023 a performing network,” a spokesman for the group said.

It was however unclear whether the process would bring to a reduction of Stellantis’ network in Europe.

The network restructuring will not involve dealers of Stellantis luxury brand Maserati and those in the United States, home of some of the group’s most popular brands such as Ram and Dodge.

Stellantis said the decision was also taken in anticipation of upcoming regulatory changes in the industry.

As of June 2023, significant changes will be made to the European Union’s Block Exemption Regulation (BER), which has granted antitrust exemptions to carmakers allowing them to operate franchise networks where they can dictate who sells their products and where.

Regulation is also expected to evolve to take into account changes brought about by the boom in online sales and new market players such as e-commerce platforms.

European vehicle dealer and repairer lobby CECRA said in a statement it would carefully follow the evolution of the restructuring and called for “a balanced distribution model between manufacturers and their networks after June 2023”.

It also noted the Austrian Supreme Cartel Court had recently banned the Peugeot brand from tying dealer payments to customer satisfaction surveys and from subsidising prices of vehicles sold at its manufacturer-owned outlets.