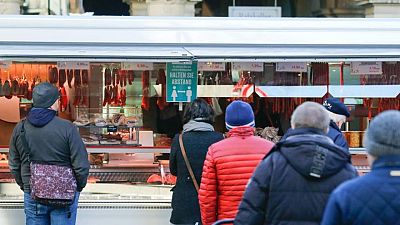 <p><body> <p><span class="caps">BERLIN</span> (Reuters) – German producer prices rose by 5.2% year-on-year in April, the biggest increase in nearly a decade, data showed on Thursday, in a further sign that supply bottlenecks are leading to increased inflation pressure in Europe’s largest economy.</p> <p>The rise in producer prices followed a 3.7% year-on-year increase in March and compared with a Reuters poll forecast of 5.1%.</p> <p>Compared to the previous month, producer prices were up 0.8% in April, the federal statistics office said.</p> <p>The index looks at factory gate prices, meaning before products or components are further processed or go on sale. It can therefore give an early indication of the development of overall consumer price inflation.</p> <p>“Price pressures continue to point upwards also at the producer level,” <span class="caps">LBBW</span> economist Jens-Oliver Niklasch said.</p> <p>“At the moment, it’s difficult to say how much of the costs companies will actually be able to pass on to consumers,” he added.</p> <p>The supply bottlenecks and overall economic recovery are expected to push up price pressures in Germany, with the government forecasting consumer price inflation to jump to 2.2% this year and to ease to 1.5% next year.</p> <p>Still, European Central Bank board member Isabel Schnabel told German broadcaster <span class="caps">ARD</span> on Wednesday that the surge in euro zone inflation is temporary and consumer prices should fall sharply next year.</p> <p/> <p> (Reporting by Michael Nienaber; Editing by Toby Chopra)</p> </body></p>