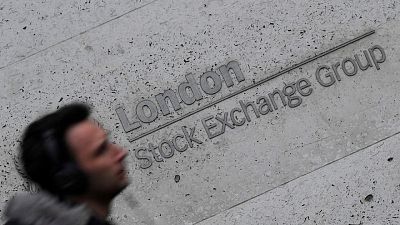 (Reuters) -Gains in industrial stocks helped London’s FTSE 100 bounce back on Thursday from its worst daily performance in a week, while shares of Trainline slumped to the bottom of the mid-cap index as UK reorganised its railway system.

The blue-chip index rose 0.2%, with Experian jumping 4.1% to the top of the index, a day after its upbeat quarterly revenue forecast.

However, gains on the index were capped by Tesco, GlaxoSmithKline, and Unilever, which fell as they traded ex-dividend.

The domestically focussed mid-cap FTSE 250 advanced 0.1%. Publisher Future surged 8.1% to the top of index after Deutsche Bank raised its price target on the stock.

Globally, stock markets struggled for traction after a jittery session on Wall Street where cryptocurrencies crashed and the U.S. Federal Reserve minutes hinted of tapering talk from a “number” of officials based on a continued strong economic recovery. [MKTS/GLOB]

“Today’s move is quite indicative of an advanced carry trade in the sense every setback is seen as an opportunity,” said Sebastien Galy, senior macro strategist at Nordea Asset Management.

“Something is in disequilibrium, it’s building up and the market is in a long-term overshoot. Fear of inflation will have an impact on European equities, but the correction will be much more shallow and not last very long as it’s not so expensive relative to the United States.”

The FTSE 100 has gained about 7.9% year-to-date on optimism about strong economic recovery. But the index has been trading in a tight range recently as higher inflation has ignited fears that central banks might pare back their support sooner.

Among other stocks, Trainline tumbled 29.5% to eye its worst day on record. Britain said it will create a new public railway operator called Great British Railways which will own and maintain rail infrastructure, collect and set fares and contract private companies to run the trains.

(Reporting by Devik Jain in Bengaluru; editing by Uttaresh.V)