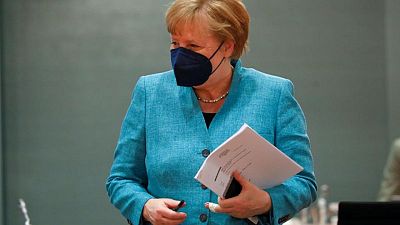 BERLIN (Reuters) – German Chancellor Angela Merkel expressed concern on Wednesday that Europe cannot make the semiconductor chips and batteries it needs to compete for the production of cars as well as the development of smart appliances.

Merkel told a summit on the future of innovation in Germany that Europe risked falling behind in areas like quantum computing, chips and batteries, essential for the future of the car industry as it shifts to make more electric vehicles.

“If a big bloc like the EU is not in position to create chips, I am not comfortable about that,” she said. “It is not good if you are a car nation and you can’t produce the core component.”

A global chip shortage has hit automakers hard after many cancelled orders when plants were idled during the pandemic. At the same time, demand for chips boomed from consumer electronics makers churning out premium devices for people stuck at home.

Carmakers use chips in everything from computer management of engines to driver assistance systems.

If Europe loses the ability to make chips that are used in internet-connected devices then it makes itself very dependent, particularly on Asia, Merkel noted.

The answer is not necessarily to replicate development in multiple countries, but the pandemic has shown the need for more watertight contracts if the West is to keep outsourcing production of components to less developed countries, she said.

“We need a global discussion about how much reliability we can give each other, or we will have higher costs if we develop something three times,” she said.

The European Union has created a new alliance to support the local production and development of semiconductors to reduce the reliance on foreign suppliers, while U.S. President Joe Biden has proposed $50 billion to boost U.S. semiconductor production.