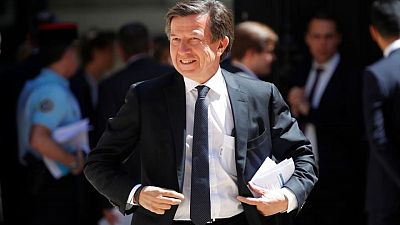 PARIS (Reuters) – Any demand by France’s antitrust watchdog for M6 or TF1 to sell their flagship channels as part of the potential remedies needed for the two groups to merge would be a deal breaker, TF1 boss Gilles Pelisson said on Wednesday.

France’s two biggest private TV groups announced their tie-up plans on Monday in what they said was a response to the accelerating challenges from global platforms.

The main challenge for TF1 and M6 and their respective parent companies, French conglomerate Bouygues and Germany’s Bertelsmann, is to get clearance by France’s competition authority, as the combined entity would have sway over three-quarters of the country’s TV advertising.

“If there was a demand for a sale of either TF1 or M6 channel as part of the remedies, neither group would accept that,” Pelisson said in a call with analysts.

The TF1’s chief executive also mentioned the risk of having the two TV groups’ licence not renewed by the French broadcasting authority CSA as another potential deal breaker.

But Pelisson stroke an optimistic tone when pressed by analysts to detail the reasons why he thought the deal could go through the antitrust funnel without having to give up its most-prized assets.

He mentioned the green light given by France’s watchdog in 2016 for the merger of French retailers Fnac and Darty in 2016, in a decision that took into account the rise of e-commerce and its market leader Amazon.