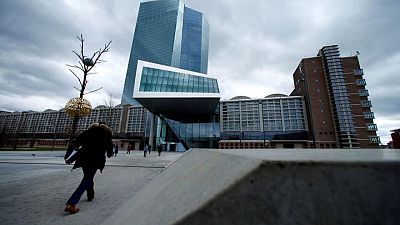 FRANKFURT (Reuters) – High debt levels and a property bubble are among Europe’s biggest economic vulnerabilities, weighing on its recovery from a pandemic-induced recession, the European Central Bank said in a biannual stability review on Wednesday.

Copious government subsidy kept much of the euro zone afloat during the pandemic but weaning the bloc off support will be tricky since that could boost bankruptcies and unemployment: a drag on growth and a risk to banks.

“Governments face a delicate balance between prematurely adjusting support measures, which may contribute to triggering a wave of corporate insolvencies, and maintaining support measures for too long and thus keeping unviable corporates alive,” the bank said.

However, the continued need for policy support to the private sector could raise medium-term sovereign debt sustainability concerns in the bloc’s vulnerable countries given that public debt has soared in the past year, the ECB added.

Still, the bank said the risks from higher sovereign debt in the near term were low, given low interest rates and a recent trend for issuing ultra long-term debt that locks in low rates.

Property prices are another key vulnerability, particularly in the case of commercial real estate, a market characterized by high demand and excessive valuations in the pre-pandemic years.

“Rising overvaluation in recent years has left room for a substantial price correction, as a majority of investors indicate that valuations have not bottomed out yet,” the ECB said. “Activity remained at levels around half of the long-run average, potentially masking a further decline in property prices.”

This is a potentially sizable problem since lending for commercial real estate accounts for 7% of banks’ exposure to the private sector, the ECB added.

Residential property markets are in better shape but overvaluation, partly a factor of ultra cheap credit, is already evident.

“The risk of a correction in residential property markets has increased amid signs of overvaluation for the euro area as a whole,” the ECB said.