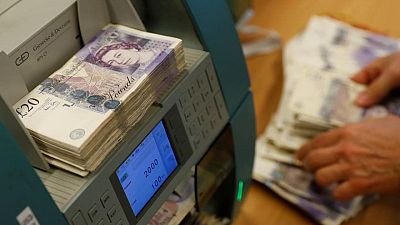 LONDON (Reuters) -Sterling turned slightly lower against a recovering dollar and hit its lowest in more than a week against the euro on Wednesday, after data showed a doubling of consumer price inflation in Britain in April.

British consumer prices rose by 1.5% in April, the Office for National Statistics said, following a 0.7% rise in March. A Reuters poll of economists had pointed to an increase of 1.4%.

The Bank of England says inflation in Britain is heading above its 2% target and will hit 2.5% at the end of 2021 thanks to a rise in global oil prices and the expiry in September of COVID-19 emergency cuts to value-added tax in the hospitality sector, as well as comparisons with the pandemic slump of 2020.

Against the euro, the pound was 0.3% lower at 86.39 pence, having earlier hitting its lowest since May 10 against the single currency at 86.33 pence.

After the Canadian dollar and Norwegian crown, sterling is the third best-performing G10 currency against the dollar year-to-date, helped by hopes of an economic rebound enabled by Britain’s rapid vaccination programme.

The Bank of England’s tapering of its asset purchase programme has also helped the pound gain relative to its peers in the G10 group of currencies, most of which have central banks that are still keeping monetary policy loose.

Money market pricing of BoE rate hikes after the inflation data were just a shade higher. May 2022 futures contracts are now pricing in about 6 bps in cumulative hikes until then, compared with 5 bps on Tuesday.

“While the Federal Reserve faces a similar dilemma, the market is starting to view the Bank of England as the most likely to blink first in the standoff with inflation,” said Marc Cogliatti, Principal, Global Markets at Validus Risk Management.

“The market is now pricing in 15 basis points worth of hikes from the Bank of England by September 2022 versus 12 basis points of hikes from the Federal Reserve over the same period. As such, we’ve seen a slight narrowing of the interest rate differential between the pound and the dollar in the FX forward market which in turn is making the pound more attractive (relatively speaking).”

Cogliatti flagged reasons for caution on the pound, however, from the growing threat of the Indian coronavirus variant in Britain, the pound’s already high valuation against the dollar, and market positioning.

Speculators are net long on the pound, having increased their net long position in the week up to last Tuesday, CFTC data last week showed.