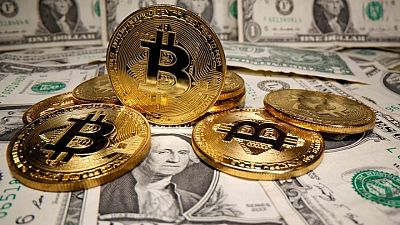 “While it only represented 0.2% of AUM, last week’s largest-ever outflows from bitcoin investment products is noteworthy,” said Matt Weller, global head of market research at Forex.com.

“Bitcoin’s perceived environmental costs are becoming a bigger and bigger part of the narrative, boosting the relative appeal of ethereum and its upcoming transition to the less energy-intense proof-of-stake security model,” he added.

Ethereum, the second-largest cryptocurrency in terms of market capitalization, continued to post solid inflows of $26.5 million last week, with a total of $910 million so far this year.

The cryptocurrency has been bolstered by the surge in usage of ethereum-based decentralized finance applications, which facilitate crypto-denominated lending outside traditional banking.

All other digital asset investment products saw inflows as well in the latest week, such as Cardano and Polkadot.

Grayscale remains the largest digital currency manager, with $47.268 billion in assets, down from $49.3 billion at the end of April.

CoinShares, the second-biggest and largest European digital asset manager, oversaw about $6 billion as of last week, up from $5.8 billion in late April.