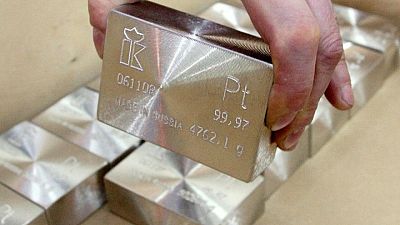 LONDON (Reuters) – The World Platinum Investment Council (WPIC) said on Monday the global platinum market will be more undersupplied this year than it previously thought as economic recovery fuels a surge in demand from industry.

Platinum is used by automakers, who embed it in vehicle exhausts to neutralise harmful emissions, by other industries such as glassmaking and for jewellery and investment.

The roughly 8 million ounce a year market will see a shortfall of 158,000 ounces in 2021, the third consecutive annual deficit, the WPIC said in its latest quarterly report.

Consumption of platinum by industry and jewellers plunged last year as the coronavirus swept the globe, but the pandemic also disrupted supply and fuelled massive demand from investors looking for a safe place to put their money.

That left the market undersupplied by 863,000 ounces in 2020, the biggest deficit on record, the WPIC said.

This year, demand from auto manufacturers and industry will rise above 2019 levels, with consumption by glassmakers in particular rocketing, the WPIC said.

Jewellery demand will recover but remain below pre-pandemic levels, while purchases by investors will fall from last year’s record but remain strong by historical standards, it said.

Supply will also rise but remain lower than in 2019.

Platinum fell to an 18-year low of $558 an ounce last year as the cononavirus spread. It has risen to around $1,200 but remains significantly below its highs between 2008 and 2014.

Many analysts and investors expect further price gains in the years ahead as demand, including from the nascent hydrogen industry and from automakers switching to platinum from more expensive palladium, outpaces supply.