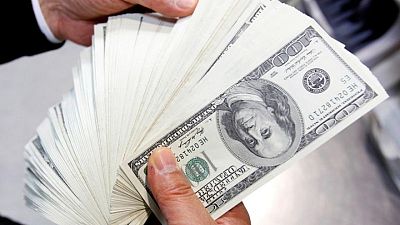 But the U.S. 10-year Treasury yield was little changed as market participants sought clues regarding the Federal Reserve’s tolerance for near- and medium-term inflation.

“Given that since the dollar’s sell-off last week it hasn’t been able to bounce much, it tells me that the driver is not the foreign currency market but the interest rate market,” said Marc Chandler, chief market strategist at Bannockburn Forex in New York. “And without higher interest rates it’s hard to see how the dollar gets much traction.”

The U.S. Federal Reserve is expected to release the minutes from its April monetary policy on Wednesday, which market participants will scrutinize for clues regarding the central bank’s views on current inflation spikes.

“The Fed is still saying they’re going to be very patient,” Chandler added. “If the U.S. doesn’t offer higher interest rates, the dollar bears the burden, and that’s where we are now.”

The Empire State report from the New York Federal Reserve showed a survey record high of prices paid by manufacturers in New York state as materials producers struggle to keep up with booming demand.

As economies re-open for business, resurgent demand combined with supply shortages has put commodity prices on an upward trajectory.

Chandler believes central bank policy is taking the lead in influencing the value of currencies typically sensitive to commodity prices.

Bitcoin dropped to a three-month low after Tesla Inc boss Elon Musk suggested over the weekend that the electric automaker may have already sold some of its holdings in the digital currency.

(Reporting by Stephen Culp; Additonal reporting by Tommy Wilkes in London; editing by Barbara Lewis; Editing by Will Dunham)