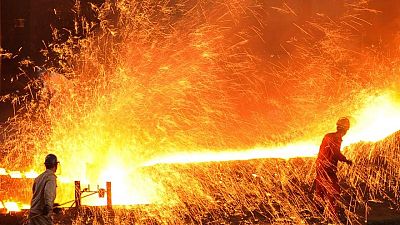 By Min Zhang and Shivani Singh

With mills cranking up production fuelled by strong profits, the world’s top steel producer churned out 97.85 million tonnes of the metal last month, data from the National Bureau of Statistics (NBS) showed on Monday.

Steel production in China had been rising for two straight months, even though Beijing has repeatedly vowed to ensure the country’s full-year output remains below the 1.065 billion tonnes produced last year.

Futures prices for construction rebar and hot rolled coils have jumped 32% and 38% so far this year, respectively. Spot market prices also broke above 6,000 yuan ($931.47) a tonne.

Output at major mills has been running at much higher levels so far in 2021 compared with the same period in the past four years, data from the China Iron and Steel Association showed.

In the first four months of the year, China produced 374.56 million tonnes of crude steel, up 16% on the same period last year, the NBS data showed.