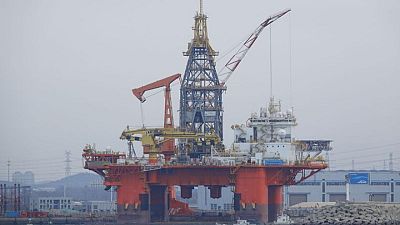 BEIJING (Reuters) – China’s crude oil throughput rose 7.5% in April from the same month a year ago, but remained off the peak seen in the last quarter of 2020 as several state-run oil refineries carried out maintenance amid thin margins and high fuel products stocks.

The country processed 57.9 million tonnes of crude oil in April, data from the National Bureau of Statistics (NBS) showed on Monday, equivalent to 14.09 million barrels per day (bpd).

That compares with 13.1 million bpd in April 2020, but was well below the record level of 14.2 million bpd registered last November.

Sinopec’s Shanghai petrochemical plant and Yanshan refinery shut around half of their refining and chemical capacity in April for planned maintenance.

Meanwhile the 70,000-bpd Cangzhou refinery is scheduled to conduct an overhaul in May.

Analysts expect average operational rates in China to stand steady in May compared with April as more independent refineries kick off maintenance and some state-backed plants resume production.

Processing rates at independent plants in Shandong, the crude refining hub in China, fell 3.9 percentage points in April from the prior month to 68.45%, data from China-based Sublime consultancy showed.