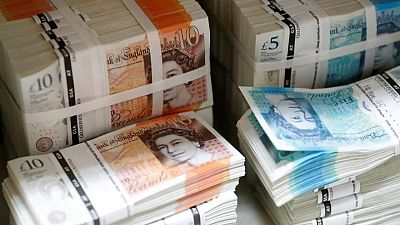 LONDON (Reuters) -Sterling held on to recent gains against the dollar on Monday as Britain took a big step towards reopening its economy, lifting a number of social restrictions imposed to combat COVID-19.

Cafes, bars and restaurants reopened for indoor service and a ban on international travel has also been lifted, among other easing measures.

Sterling has gained against the dollar for two weeks straight, and on Monday, consolidated near the $1.41 mark. It traded 0.1% higher in afternoon deals in London, at $1.4119.

“It has been a well-telegraphed move, but major re-opening in the UK today should continue to be welcomed by UK asset markets and the pound,” said ING strategists in a note to clients.

However, there is growing concern about the B.1.617.2 variant of the coronavirus, which British scientific advisers say will become dominant in the United Kingdom and is more transmissible than a variant first identified in Kent, England.

“Despite threats from the Indian variant, the scheduled re-opening will keep expectations of a summer UK recovery on track and feed into the BoE’s upbeat assessment of the UK activity outlook.”

Sterling’s gains this year have been aided by a more hawkish Bank of England (BoE), which has begun tapering asset purchases, and by Britain’s vaccination drive.

Analysts also say a combination of a stronger UK economic rebound than expected and the belief that any Scottish independence vote is a long way off makes the pound relatively attractive.

Speculative positioning on the pound increased in the week up to last Tuesday, CFTC data on Friday showed.

Businesses ramped up their search for new staff as pubs, restaurants and other hospitality and travel firms got ready for the lifting of restrictions in England, a survey showed.

But an exodus of foreign workers is aggravating a shortage of candidates, with more than 10 jobs on offer for every job-seeker in some cities, according to the survey by job search website Adzuna.

Further signs of Britain’s economic health will seen later this week in a busy data calendar. Labour market data is due on Tuesday, inflation on Wednesday, followed by retail sales data and purchasing managers’ indexes on Friday.

“With an optimistic BoE and new members incoming, this data potentially move the needle for the UK front end and by extension sterling,” CitiFX analysts Ebrahim Rahbari and Calvin Tse said in a note to clients.