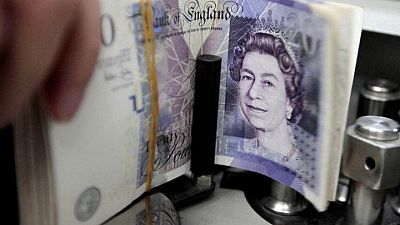 LONDON (Reuters) – Sterling was on track for a second week of gains against the dollar on Friday, consolidating above $1.40 as the U.S. currency took a breather from a recent rally.

The pound is up 1.8% against the dollar since the start of May, aided by a more hawkish Bank of England which has begun tapering asset purchases, as well as Britain’s vaccination drive that has enabled a gradual reopening of the economy.

Britain will adapt its vaccine rollout to protect people more quickly in areas where a coronavirus variant first detected in India has emerged, the vaccine minister said on Friday.

The UK has delivered one of the fastest inoculation campaigns in the world, giving a first shot to almost 70% of the adult population and a second to 36%, helping to reduce infection rates and deaths.

“GBP is largely holding onto recent gains and progress on the Indian variant of the virus is yet to have any impact,” said ING in a note to clients. “Yet this needs to be watched.”

“EUR/GBP did reject levels down at 0.8560 earlier this week quite strongly and we tend to favour more consolidation for the time being.”

Analysts also say a combination of a stronger UK economic rebound than expected and the belief that any Scottish independence vote is a long way off make the pound relatively attractive.

Britain’s economy grew by a stronger-than-expected 2.1% in March from February, gathering speed for what is expected to be a sharp bounce-back this year after its deep coronavirus slump of 2020.