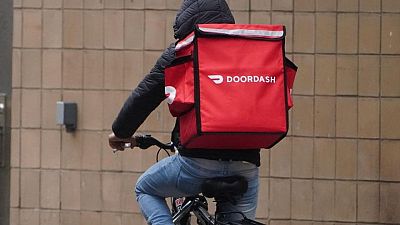 (Reuters) – DoorDash Inc raised its forecast for annual gross order value on Thursday, as food delivery demand remained resilient in the first quarter against the backdrop of vaccine rollouts and easing COVID-19 restrictions encouraging people to dine out.

The company shares, which have gained about 13% over their initial public offering price, rose 4% in extended trading.

DoorDash, along with rivals Uber Eats, Grubhub Inc and Postmates Inc have benefited from a surge in demand for app-based delivery services in the last year as the COVID-19 situation kept people at home.

DoorDash, which has also branched out into delivery from grocery and convenience stores last year, reported a near three-fold jump in quarterly revenue to $1.08 billion, also boosted by government stimulus checks.

“As markets continued reopening and in-store dining increased across the United States, the impact to our order volume was smaller than we expected, which contributed to strong performance in the quarter,” the company said in a statement.

However, the company added that it expects demand to slow as the effects of stimulus wear off.

DoorDash, which went public in December, said it expects full-year marketplace gross order value, which is the total value of all orders placed on its app as well as fees for its DashPass subscription service, of $35 billion to $38 billion, compared with a previous forecast of $30 billion to $33 billion.

(Reporting by Uday Sampath in Bengaluru; Editing by Shailesh Kuber)