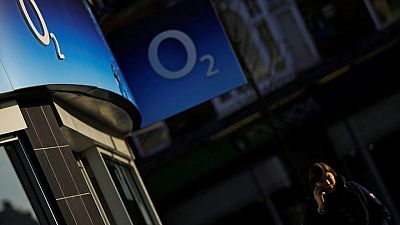 LONDON (Reuters) – British mobile operator O2 said on Thursday it would pay its staff a 1,930 pound ($2,709) bonus as it reported record high earnings for the first quarter, ahead of its merger with Liberty Global’s Virgin Media.

Mark Evans, chief executive of Telefonica-owned O2, said the efforts of the company’s 6,500 staff during the pandemic had driven earnings and pushed the number of connections on its network up to 36.6 million, also a record high, in the January-March quarter.

Earnings were also boosted by more direct distribution and increased use of digital channels such as its app to improve customer service, he said.

The pandemic caused pressure on the top line, mainly from a lose of roaming revenue and the closure of stores, he said. Revenue declined 9.4% year-on-year in the quarter but earnings, or operating income before depreciation and amortization, rose 7.6% to 478 million pounds.

“Since April (12th), our stores have been open, and we’ve seen a significant bounce back,” he said in an interview with Reuters.

Evans will leave O2 when the merger receives final regulatory clearance, expected by around the middle of the year. Virgin Media boss Lutz Schuler will lead the combined group.