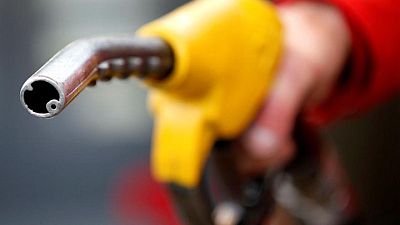 NEWYORK (Reuters) -Oil prices fell about 3% on Thursday as India’s coronavirus crisis deepened and a key U.S. fuel pipeline resumed operations, halting a rally that had lifted crude to an eight-week high after forecasts for a rebound in global demand later in the year.

Both benchmarks marked their biggest daily drops in percentage terms since early April.

Prices also came under pressure as a broader surge in commodity prices, labor shortage and much stronger-than-expected consumer prices data this week have stoked inflation concerns that could force the U.S. Federal Reserve to raise interest rates.

Raising rates typically boosts the U.S. dollar, which in turn pressures oil prices because it makes crude more expensive for holders of other currencies. [USD/]

“Inflationary fears have unnerved some investors into taking some profit off the table with their energy trades.”

U.S. President Joe Biden said motorists can expect filling stations to begin returning to normal this weekend even as shortages gripped some areas amid restart of the country’s top fuel pipeline network after it was shut by a ransomware attack.

The nearly-week long shutdown of the Colonial Pipeline, which carries 100 million gallons per day of fuel, caused gasoline shortages and emergency declarations from Virginia to Florida, led two refineries to curb production, and spurred airlines to reshuffle refueling operations.

In another bearish signal for oil demand, a variant of the coronavirus has swept through India, the world’s third-biggest importer of crude.

Medical professionals have not been able to say when new infections will plateau and other countries are alarmed over the transmissibility of the variant that is now spreading worldwide.

“Concerns are growing that the untamed spread of the coronavirus in India and in Southeast Asia will dent oil demand,” PVM analysts said in a note.

“Its impact, however, is expected to be relatively brief and the second half of the year will see the healthy revival of oil demand growth.”