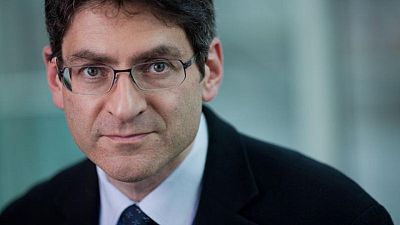 LONDON (Reuters) -Bank of England policymaker Jonathan Haskel said on Wednesday that he was not too concerned about the medium-term inflation outlook in Britain, but would watch out for damage done by the pandemic to the country’s productive capacity.

Last week the BoE forecast consumer price inflation would rise above 2.5% by the end of this year from 0.7% currently, but then fall back to its 2% target over the course of next year.

“I am not that worried about inflation,” Haskel said during an online panel discussion hosted by the Tuck School of Business, part of Dartmouth College in the United States.

The BoE is forecasting a rapid rebound for Britain’s economy as the economy reopens from COVID restrictions, and sees short-term inflationary pressures from supply chain disruption, higher oil prices and annual comparisons with 2020’s depressed prices.

“There will be lots of record figures of ‘record this’ and ‘record that’. If you jumped down on the trampoline, you know, the trampoline bounces back up again,” Haskel said.

“What I think we’ve got to be much more aware of, and this is important for inflation, is what the medium-term consequences are going to be, and in particular if the economy has a lot of scarring in it,” he added.

The BoE revised down its estimate of ‘scarring’ last week as it now sees less of a risk of long-term unemployment than before, partly because of extended furlough payments.

But the central bank has warned that a slump in business investment during the pandemic could limit companies’ ability to keep up with rising demand.

“If we have substantial impairment of our supply-side capacity and we run the economy too hot … then we are in trouble,” Haskel said.