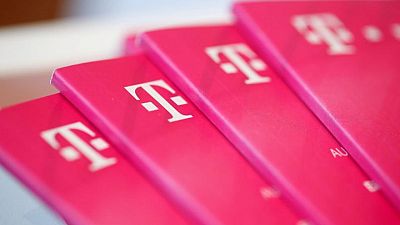 BERLIN (Reuters) -Deutsche Telekom on Wednesday raised its profit guidance for 2021 after a strong showing by its businesses in the United States and Europe in the first quarter, with group revenue and core profit beating market estimates.

“We are sustaining momentum and continuing our successful growth story,” said Chief Financial Officer Christian Illek. “Our customer numbers and key financial metrics are on track on both sides of the Atlantic.”

Following a guidance raise by U.S. unit T-Mobile, which has already reported results, Deutsche Telekom also nudged up the outlook for profit and cash flow at its European operations for the year.

Previously core profit had been seen at around 37 billion euros and free cash flow at around 8 billion.

First-quarter revenue increased by 32.3% to 26.39 billion euros ($32 billion), beating consensus estimates of 25.595 billion euros in a poll of analysts published by the company.

After stripping out one-off gains from T-Mobile’s acquisition of smaller U.S. rival Sprint, which closed just over a year ago, revenue grew by 7.1% in the quarter and adjusted EBITDA AL by 8.3% on an organic basis.

The one-off effects will drop out of the equation from the second quarter.