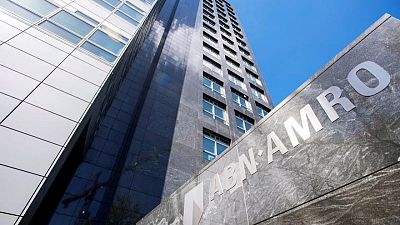 AMSTERDAM (Reuters) -ABN Amro shares fell more than 7% in early trading on Wednesday, after the Dutch lender reported a worse-than-expected slide in its interest income over the first three months of 2021 and booked a 480 million euro ($582.34 million) fine for money laundering.

ABN reported a net loss of 54 million euros over the first quarter, as a money-laundering fine outweighed the positive impact of economic recovery in the Netherlands.

ABN Amro last month agreed to pay 480 million euros to Dutch prosecutors to settle a criminal investigation into its lax oversight of money laundering through its accounts.

The investigation also increased ABN’s expenses, as it took on extra staff to strengthen its anti-money laundering controls.

The largely state-owned bank last year almost doubled the number of staff dedicated to spotting suspicious transactions to nearly 4,000, increasing employment at the bank for the first time after years of cuts.

Despite the fall in interest income and rising costs, operational performance was in line with previous quarters, Chief Executive Robert Swaak said.

He said the Dutch economy was weathering the COVID-19 crisis relatively well and he expected “a strong economic rebound later this year as lockdown restrictions ease”.

The lender improved its market share of new mortgages as the Dutch housing market booms, while economic recovery meant it could release 77 million euros from its provisions for bad loans.

The first-quarter net loss was roughly in line with analysts’ average expectations in a company-compiled poll. The lender had reported a loss of 395 million euros a year ago at the height of the pandemic.