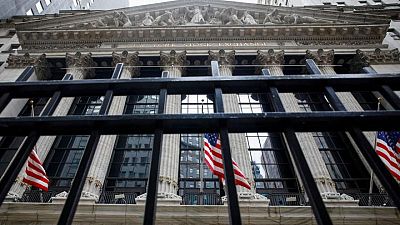 (Reuters) – Wall Street’s main indexes opened sharply lower and the Nasdaq shed 2% at the open on Tuesday, before recovering some losses, weighed down by technology-related stocks with lofty valuations on worries over inflation.

“It’s two parts. One, there are valid valuation concerns as the run-up (for tech stocks) has been significant. Two, as re-opening happens and people go back to the office there’s a rethinking of the balance between tech stocks and re-opening stocks.

“We believe a balance between growth and value is warranted. It’s unlikely over the next two years one will dominate the other.

“(Inflation) impacts subsectors of the market but other forces such as the dollar and bond yields are the bigger drivers.

“(Today’s biggest drags) are biggest winners over the last twelve months. Tech and communication services could have a 10% correction but I would stress that it’s not uncommon or unhealthy.

“You want to get some air out of the balloon and give markets an opportunity to catch their breath. That’s a sign of a healthy market.

“We are also entering into the summer months, a seasonally difficult period for stocks.”

“I know a lot of people are spinning the inflation theme as the reason why you are seeing some of the profit taking coming out of the tech sector…What I would expect to be selling off as well if that were really the case, I don’t see that. Treasury yields aren’t spiking… Credit is behaving just fine.”

“Everybody is looking for a narrative and everybody seems to want to point to the inflation backdrop and the inflation concerns as to why tech is getting whacked in here. Why it’s getting hit, I am not 100% sure… People are still long tech, people still are long growth. The large-cap tech names have traded sideways for probably at least the last six months or so, so it’s not surprising that maybe we are finally starting to see some money move out of that.”

“Big tech (has become) increasingly vulnerable and sensitive to yields inching higher. One of the concerns right now is, are we now moving into an environment where we are going to see yields move higher. There is an assumption that perhaps Friday was a one-off, but the expectations are as long as COVID eases we are going to see a pickup in employment numbers. We’re also going to see input costs continuing to rise. So that’s a concern for rates. Perhaps after Friday the market recalibrated and thought… the Fed may wait to talk about the possibility of tightening. You can have a stretched market as long as the Fed remains committed to keeping rates lower for longer.”