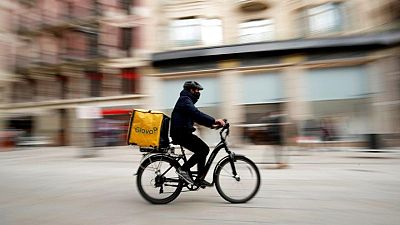 By Belén Carreño and Joan Faus

MADRID (Reuters) -Food delivery companies based in Spain have three months to employ their couriers as staff under new rules approved on Tuesday by the government, one of the first laws in Europe regarding gig-economy workers’ rights.

The decree aims to clarify the legal situation of thousands of riders after Spain’s Supreme Court ruled last year that companies must hire them as employees.

“The regulation approved today … places us at the forefront of a technological change that cannot leave labour rights behind,” Labour Minister Yolanda Diaz said.

A debate on how to regulate workers’ rights in the gig economy is unfolding globally. The European Commission has opened a public consultation period on potential EU-wide rules.

The new Spanish rules came into force immediately, with companies being given 90 days to comply. According to the labour ministry’s calculations, nearly 17,000 riders without a contract have already been identified.

“This regulation will directly hurt thousands of couriers who use food delivery apps for much-needed flexible earnings opportunities and made it clear they do not want to be classified as employees,” a spokesman said.

“The decree approved today by the cabinet is a hard blow for the future of the digital economy in Spain”, according to Adigital, a business industry association that represent gig economy companies including Spanish start-up Glovo and Deliveroo.

Although the legislation makes it harder for companies to have freelance couriers, closing the door on a common practice, several riders’ associations and labour experts have said it does not completely resolve their legal situation, anticipating further potential court battles.

In any case, most delivery companies have already started preparing for the change, looking for new business models that will allow them to be profitable.

Just-Eat, the Spanish branch of Take Away, has already hired some of its workers and covers peak demand with workers from transport companies.

Others, such as Glovo, have opted to hire some riders through temporary employment agencies, according to riders.

The government also approved new rules obliging companies to explain to their staff how their workload-sharing algorithms work.

This transparency requirement will affect all platforms, not just food delivery companies.

“Workers have the right to know what motivates business decisions,” said Diaz. “Algorithms are going to be put at the service of the majority.”