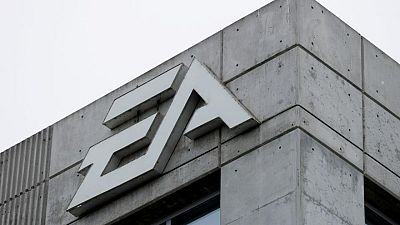 <p><body> <p>By Tiyashi Datta</p> <p>(Reuters) -Electronic Arts Inc on Tuesday forecast annual adjusted revenue above analysts’ estimates, betting that demand for its titles, including “<span class="caps">FIFA</span> 21” and “Apex Legends,” would stay strong even as <span class="caps">COVID</span>-19 restrictions ease.</p> <p>The video gaming industry has been a big pandemic winner thanks to a surge in engagement from gamers staying indoors. U.S. consumer spending on video games rose 18% in March to a record $5.6 billion, according to data from research firm <span class="caps">NPD</span>.</p> <p>But speedy vaccinations and easing curbs have encouraged people to head outdoors, raising concerns that the gaming boom would soon fade.</p> <p>EA on Tuesday signaled it expected the momentum to continue, estimating full-year adjusted revenue to be $7.30 billion, higher than a Refinitiv <span class="caps">IBES</span> estimate of $6.61 billion.</p> <p>“We expect to continue to drive strong organic growth in Apex Legends in fiscal 2022 and expand the franchise to new platforms with the launch of Apex Mobile in the back half of the year,” Chief Financial Officer Blake Jorgensen said on a post-earnings call. </p> <p>The company’s shares were nearly 3% higher at $145.05 in extended trading.</p> <p>EA has been expanding its customer base and mobile gaming footprint through deals for companies including UK-based Codemasters, known for racing titles “F1” and “Dirt”, and “Kim Kardashian: Hollywood” creator Glu Mobile.</p> <p>However, the costs of the acquisitions and some minor tax changes impacted its fourth-quarter profit, Jorgensen said in an interview with Reuters. </p> <p>Net income for the quarter ended March 31 fell to $76 million, or 26 cents per share, from $418 million, $1.43 per share, a year earlier.</p> <p>Excluding one-time items, the company earned $1.23 per share, beating expectations of $1.05 per share. Revenue of $1.49 billion also exceeded estimates of $1.39 billion.</p> <p> (Reporting by Tiyashi Datta in Bengaluru; Editing by Aditya Soni)</p> </body></p>