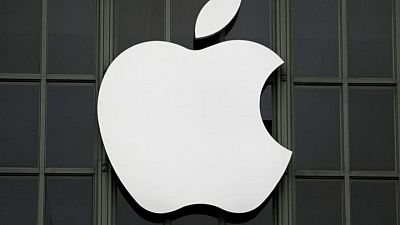 TAIPEI (Reuters) -Production of the Apple iPhone 12 at a Foxconn factory in India has slumped by more than 50% because workers infected with COVID-19 have had to leave their posts, two sources told Reuters.

The Foxconn facility in the southern state of Tamil Nadu produces iPhones specifically for India, the world’s No.2 smartphone market.

Tamil Nadu is one of the worst hit states in the second coronavirus wave engulfing India. Officials imposed a full lockdown in the state from Monday, closing public transport and shuttering shops, to try slow surging infections.

More than 100 Foxconn employees in the state have tested positive for COVID-19 and the company has enforced a no-entry ban at its factory in the capital of Chennai until late May, one of the sources said.

“Employees are only allowed to leave but not to enter the facility since yesterday,” the person said. “Only a small part of output is being kept.”

More than 50% of the plant’s capacity had been cut, both sources said, declining to be named as they were not authorised to speak to the media.

They did not specify the plant’s capacity and it was unclear how many workers were at the facility, which provides dormitory accommodation for employees.

Taipei-based Foxconn, the world’s largest contract electronics maker and a major supplier to Apple, said a small number of employees at one of its facilities in India tested positive for COVID-19 and the company was providing them with support, including medical assistance.

“Foxconn places the health and safety of our employees as our highest priority and that is why we have been working closely with local government and public health authorities in India to address the challenges that we and all companies are facing in dealing with the COVID-19 crisis,” it said in a statement to Reuters.

Foxconn declined to comment on factory output or specific staffing levels. Apple did not immediately respond to a request for comment.

Foxconn’s shares fell as much as 6.2% after the Reuters report. The stock closed down 5.31%, outpacing a 3.8% fall in the broader market on concerns about rising COVID-19 cases in Taiwan.

India has benefited from Apple’s move to shift some areas of production from China to other markets as it navigates a trade war between Washington and Beijing, with Apple announcing in March it had started the assembly of the iPhone 12 in India.

While Apple’s share of the budget phone-dominated India market is small, CEO Tim Cook said in January that India business doubled in the December quarter compared to the previous year, helped by an online store launch.

Foxconn similarly said strong smartphone sales contributed to a stronger-than-expected performance in the fourth quarter amid the work-from-home trend.

Market research firm Canalys said that growth in India extended through the first quarter, with Apple shipping more than a million iPhones. Demand for the iPhone 12 was supported by local assembly and attractive finance offers, Canalys said.

However, the outlook has been dimmed by the coronavirus crisis engulfing India, where COVID-19 cases and deaths have surged at a record pace in recent weeks. The country has recorded around 22.66 million infections and more than 246,000 deaths, with experts saying the true figures could be far higher.

Foxconn is not the only producer affected. Nokia and Chinese smartphone maker OPPO last year suspended production at factories in India after workers tested positive for COVID-19.

Taipei-based tech research firm TrendForce on Monday trimmed its global smartphone production growth forecast to 8.5% from 9.4%, citing the coronavirus impact in India on major vendors including Samsung and Apple.

“Smartphone brands are therefore expected to closely monitor their inventories of whole devices and adjust their subsequent production plans accordingly,” TrendForce said in a report, adding it could revise the forecast lower still if the outbreak continues to hit local production and sales in the second quarter.