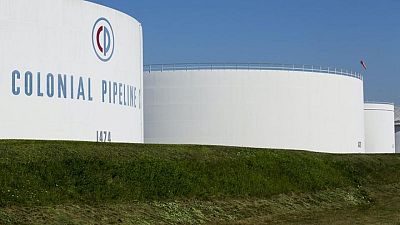 NEWYORK (Reuters) -U.S. gasoline prices at the pump jumped 6 cents in the latest week, according to the American Automobile Association (AAA), and could soon be headed for the highest level since 2014 due to a cyber attack that shut down the country’s biggest fuel pipeline system.

Average U.S. pump prices increased 6 cents per gallon in the latest week to $2.967 per gallon for regular unleaded gasoline, the AAA said. An increase of 3 more cents would make the national average the most expensive since November 2014.

That prospect had U.S. motorists and small businesses worried about the hit to their wallets. A ransomware attack forced Colonial Pipeline to shut down its system on Friday in an outage expected to last a full week or more.

On Monday, Colonial said it expects to “substantially” restore operational service by the end of this week. Still, some drivers on the East Coast were filling tanks as a precaution as gasoline demand picks up ahead of summer vacation season, and as more people are vaccinated against COVID-19.

“I thought I better fill up right now,” said Marilyn Slusher, 69, of Decatur, Georgia, near Atlanta. “I know what it costs, but I figure it’s going to get worse, so I better go for it,” she said as she put gasoline into her Volkswagen Atlas SUV.

The Colonial network ships more than 2.5 million barrels per day (bpd) of gasoline, diesel and jet fuel from the Gulf Coast to populous southeastern and northeastern states, making up nearly a half of U.S. East Coast fuel supply.

The Southeast should feel the squeeze first. Areas including Mississippi, Tennessee and the East Coast from Georgia into Delaware are likely to feel pain at the pump with prices rising 3 to 7 cents this week, said AAA spokeswoman Jeanette McGee.

Parts of Florida, Georgia, Alabama, South Carolina, North Carolina, and Tennessee rely on the line for fuel, and some suffered acute localized shortages and spikes in prices at the pump during previous shutdowns.

“I went to five stations before I found a station that had premium only,” said Katina Willey, 48, in Milton, Florida.

“My husband had the same issue … There were lines at three of the five stations I tried,” she said.

“Motorists are well advised not to strain the system by filling up … they may make the problem much more severe,” said Patrick DeHaan, head of petroleum analysis at fuel tracking firm GasBuddy.

On Sunday, the U.S. Department of Transportation issued waivers in 17 states that would allow truckers hauling fuel to work longer hours.

Marcus Blash, owner of a trucking company in Atlanta’s East Atlanta neighborhood, cringed when he heard the pipeline shut down.

“I like about dropped my supper plate,” he said, “I have four trucks and four drivers counting on me, and we use between a 1,000 to 2,000 gallons of diesel a week,”

(Reporting by Devika Krishna Kumar and Laila Kearney in New York and and Rich Rich McKay; additional reporting by Laura Sanicola; Editing by David Gregorio and Will Dunham)