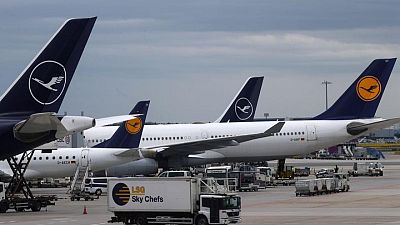 FRANKFURT (Reuters) – Lufthansa is working with Deutsche Bank and Bank of America to sound out investors about a capital increase worth roughly 3 billion euros ($3.7 billion), possibly as soon as June, people close to the matter said.

The final size and timing of the rights issue to repay state aid Lufthansa received during the pandemic will be subject to market conditions and the German airline is expected to opt for a June/July or September/October window, the people said.

Lufthansa and the banks, the lead advisers on the deal, declined to comment.

Lufthansa shareholders this month approved a potential capital increase of up to 5.5 billion euros, though finance chief Remco Steenbergen has said that was just the sum of the two tranches of hybrid capital, dubbed silent participation, it received as part of a 2020 bailout.

“The actual increase will be lower than that and is really dependent on what we see the need to be at the moment we decide to issue,” he has said.

Capital markets needed to be supportive and the airline’s plans to divest units such as LSG, AirPlus and Lufthansa Technik also needed to be taken into account when determining the size of the capital increase, he has said.

The travel industry’s hopes for a post-pandemic recovery have been hit by many false starts, beset by new restrictions, virus variant outbreaks and a sluggish European vaccine rollout.

Lufthansa only expects to fly at about 40% of its pre-pandemic capacity in 2021, but it has raised its number of holiday destinations to over 100, banking on surging demand as vaccination campaigns reach a large number of people.

Lufthansa has already drawn on 1 billion euros of silent participation capital from the government and said earlier this month that it was considering using a further 1.5 billion euros to secure its liquidity position.