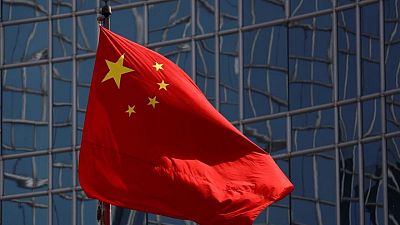 <p><body> <p><span class="caps">SHANGHAI</span> (Reuters) – China’s internet watchdog said on Saturday that it will ban some mobile app notifications and tighten regulations as the government ramps up a campaign to rein in the growing influence of internet companies over its citizens’ daily lives.</p> <p>The Cyberspace Administration of China (<span class="caps">CAC</span>) will strengthen guidance and control of mobile app information sources, and restrict notification volumes as part of what it terms a “people’s war” aimed at bringing order to the online environment, Xie Dengke, a <span class="caps">CAC</span> spokesperson told a State Council press conference.</p> <p>The <span class="caps">CAC</span> will ban media-related mobile applications from sending notifications from independent social media accounts operating in violation of regulations, and will filter what it sees as harmful and undesirable information, Xie said. </p> <p>Xie did not name specific mobile applications or social media accounts affected by the new rules.</p> <p>The <span class="caps">CAC</span> will also work with financial regulators to “rectify” self-published financial accounts that have spread rumours, Xie said, to bring the dissemination of financial information under control.</p> <p>China has in recent months sought to curb the economic and social power of its once loosely regulated internet giants, in a clampdown backed by President Xi Jinping. </p> <p>Greater scrutiny and a strengthening of antitrust regulatory powers mirror an increasingly tough approach to the tech sector in the United States and Europe.</p> <p>Following a “self-inspection” period to give mobile application operators an opportunity to address problems, the regulator will punish those not meeting certain requirements with penalties including fines and service suspensions, Xie said. </p> <p>He did not say how long the self-inspection period would last.</p> <p>Earlier this week, the internet watchdog found that 33 mobile phone apps broke data privacy rules by collecting data without consent, among other issues.</p> <p/> <p> (Reporting by Winni Zhou and Andrew Galbraith; editing by Clelia Oziel)</p> </body></p>