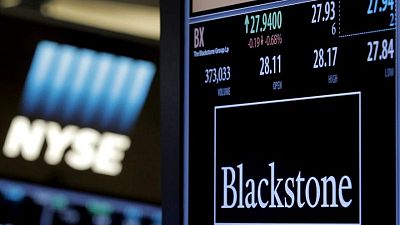 The potential offer comes at a time when the housebuilder and logistics firm, which counts e-commerce players Amazon UK, DHL and Ocado as clients, has seen a growth in warehousing demand due to online shopping during the pandemic.

Shares in the London-listed firm climbed as much as 20% to 538 pence, just shy of the 542 pence apiece potential offer. They have gained about 30% in the past 12 months.

The non-binding conditional offer, which follows a series of other proposals by Blackstone, was at a premium of about 21% to the stock’s last closing price.

St. Modwen said its board would be willing to recommend the proposal unanimously should Blackstone make a firm offer at that price by the June 4 deadline.

The Birmingham-based company builds homes, owns and manages several industrial and logistics assets in Britain and develops sites for housebuilding, commercial and other projects.

St. Modwen made a loss of 120.8 million pounds last year, hurt mainly by site closures during initial lockdowns in the UK in 2020 despite recording profits in the second half.

Dealmaking has been picking up steam in 2021, with companies, private equity firms and special purpose acquisition companies (SPACs) all eyeing acquisitions this year after the onset of the COVID-19 pandemic.

Blackstone, currently performing due diligence on St. Modwen, has been busy across the world in the past few months and is currently in a takeover battle for Australia’s Crown Resorts Ltd.

(Reporting by Yadarisa Shabong in Bengaluru; Editing by Anil D’Silva and Elaine Hardcastle)