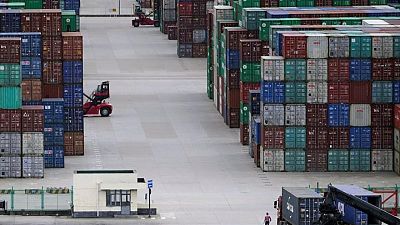 By Stella Qiu and Kevin Yao

BEIJING (Reuters) -China extended its impressive trade performance in April, with exports unexpectedly accelerating and import growth hitting a decade high, in a boost to the world’s second-largest economy.

A brisk U.S. economic recovery and stalled factory production in other countries hit by coronavirus have propped up demand for goods made in China, analysts say.

Exports in dollar terms surged 32.3% from a year earlier to $263.92 billion, China’s General Administration of Customs said on Friday, beating analysts’ forecast of 24.1% and the 30.6% growth reported in March.

“We expect China’s export growth will stay strong into the second half of this year, as the two factors above will likely continue to favour Chinese manufacturers. Exports will be a key pillar for growth in China this year.”

The numbers helped push the yuan and stocks in China and other Asian markets higher.

Imports were also impressive, rising 43.1% from a year earlier, the fastest gain since January 2011 and picking up from the 38.1% growth in March. It was also slightly faster than the 42.5% rise tipped by the Reuters poll, bolstered by higher commodity prices.

But Zhang Yi, chief economist at Zhonghai Shengrong Capital Management, said it remains to be seen if strong import growth, mainly driven by price inflation, could be sustained as China winds down its fiscal policy support.

“It must be noted that the fast year-on-year growth today was largely due to the negative growth a year ago. The two-year average growth was only about 10%, which is not that strong.”

Indeed, import volumes for some products are starting to level off. China’s iron ore imports fell 3.5% in April from a month earlier, while copper imports dropped 12.2% on the month.

China’s trade surplus of $42.85 billion was wider than a $28.1 billion surplus tipped in the Reuters poll.

However, analysts still expect China’s economic growth to slow from the record 18.3% expansion in the January-March quarter as the COVID-19 pandemic disrupts global supply chains, slowing movement of goods and driving up shipment costs.

“Despite the upbeat demand outlook and policy support, supply-side constraints including the global chip shortage, shipping disruption, container shortages, and skyrocketing freight rates are expected to persist for some time,” said Christina Zhu, Economist at Moody’s Analytics in a note on Thursday.

A persistent shortage of semiconductors needed for a wide range of products including consumer electronics and cars is also starting to hurt manufacturers, weighing on production.

Etelec electronics, a Zhongshan-based manufacturer of LED lights, stopped taking on new orders from April 26, due to a shortage in integrated circuits, the company announced in a statement seen by Reuters.