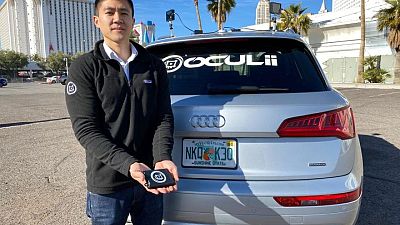 <p><body> <p>By Jane Lanhee Lee</p> <p>(Reuters) – Oculii, a startup that makes software to boost the resolution of radars for use in self-driving cars, said on Thursday it raised $55 million in its latest funding round. </p> <p>Radars are already widely used in cars to assist with emergency braking, blindspot detection, and parking-assist systems, but the low resolution of the image limits its usage, said Steven Hong, <span class="caps">CEO</span> of the Dayton, Ohio startup.</p> <p>The artificial intelligence software Oculii has developed can boost the radar resolution by 100 times, Hong said. The picture created by the software and shown to Reuters looked similar to images and maps created using lidars, a laser sensor used in self-driving cars.</p> <p>“Our particular approach is building on existing market-proven hardware that’s been deployed very low-cost,” said Hong. “With the software, it’s able to achieve lidar-like resolutions, quickly improving and scaling to one day exceed the performance of these lidar sensors.”</p> <p>Oculii is licensing the software to auto suppliers to integrate the radars into systems such as the advanced driver assistance systems (<span class="caps">ADAS</span>), though Hong said he couldn’t disclose the names of the customers or partners. </p> <p>While the prices of lidars have been decreasing quickly, they are too expensive for use in mass-manufactured products including cars. Still, several autonomous car tech company executives have told Reuters they believe lidars will be needed for the robotaxi future, even with the improvement of radar. </p> <p>Hong said Oculii is testing with some autonomous car companies in China and North America using just radars and cameras. He said Oculii is also selling kits that can be integrated into autonomous robots and drones. </p> <p>Oculii’s latest funding round was co-led by Catapult Ventures and Conductive Ventures, but Oculii declined to disclose its latest valuation.</p> <p>Hong co-founded the company with his father Lang Hong who has been working on radars for the last three decades as a professor and the dean of the engineering school at Wright State University.</p> <p/> <p> (Reporting By Jane Lanhee Lee; Editing by Karishma Singh)</p> </body></p>