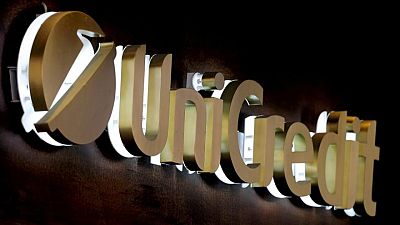 MILAN (Reuters) – UniCredit could consider mergers and acquisitions to drive revenue and profit growth under new CEO Andrea Orcel, who said the phase of “active retrenchment” was over for the Italian bank.

Orcel’s openness to M&A marks a clear shift from his predecessor, Jean Pierre Mustier, as does his pledge to revive UniCredit’s lending business by ditching the risk-averse policy the French banker had opted for.

But Orcel, who took over in April after Mustier left in a strategy clash with the board, warned that the weakness in the lending business would weigh on coming quarters.

“It will take time to re-energise and strengthen the business, moving from a period of active retrenchment to one defined by disciplined profitable growth and healthy organic capital generation,” Orcel said.

“With respect to M&A,” he added, “It is not a purpose in itself but I do see it as an accelerator and a potential improver of our strategic outcome,” when in the best interests of shareholders and with low execution risks.

The task falls to the 57-year-old Italian banker, whose three decades in investment banking, first at Merrill Lynch and then UBS, have made him one of Europe’s most prominent dealmakers

UniCredit hired Orcel after rival Intesa Sanpaolo last year kicked off a new round of consolidation in Italy by snatching rival UBI to secure a fifth of the domestic market.

As Italy’s only bank that regulators deem of global systemic relevance, UniCredit could turn to Europe for tie-ups, analysts said.

But Orcel also faces options on the bank’s home turf, where the government is offering incentives for mergers as it seeks to offload state-owned Monte dei Paschi.

Orcel, who is reviewing the bank’s senior management structure, said he would present its strategy to investors in the second half.

Finance Chief Stefano Porro said UniCredit would “normalise its risk appetite” as the post-pandemic recovery took hold, lending more in all the countries where it operates.

Shrinking assets helped to lift UniCredit’s core capital ratio to 15.9% in the first quarter, in which upfront fees and strong trading gains drove revenues up 7% year-on-year.

The bank trimmed its outlook for 2021 revenue but it broadly confirmed its annual profit goal helped by lower than expected loan losses.

Shares in UniCredit rose 5% by 1342 GMT, bucking a flat European sector. Weighed down by questions over profitability and strategy, UniCredit has underperformed this year’s 25% rally in European banks.

After setting aside 2.2 billion euros last year against COVID-driven loan losses, UniCredit booked only 167 million euros in loan-loss provisions in the quarter, a third of what analysts had expected.

Loan-loss charges worth 1.3 billion euros had contributed to a net loss of 2.7 billion euros at UniCredit in the first quarter of 2020, when costs to lay off staff and to cut its stake in Turkish lender Yapi Kredi also weighed.($1 = 0.8331 euros)