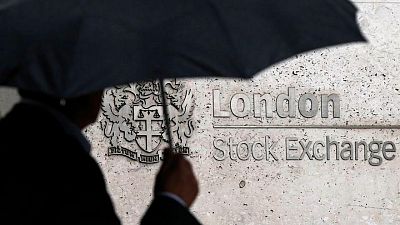 (Reuters) -London’s FTSE 100 hit a more than one-year high on Thursday, boosted by heavyweight consumer staple stocks and positive earnings updates from Next and Melrose Industries, while the Bank of England eased the pace of bond-buying and raised the forecast for economic growth.

The blue-chip index rose 0.4%, with fashion retailer Next gaining 1.5% as it raised its profit outlook for the 2021-22 year for the second time in two months.

Engineer Melrose climbed 0.8% after it said it was performing “modestly” ahead of expectations, with operating margins in the first quarter improving faster than expected.

The Bank of England said Britain’s economy would grow by the most since World War Two this year and slowed the pace of its trillion dollar bond-purchasing programme, but stressed it was not reversing its stimulus.

“The BoE is quite explicit in trying to convince the market saying its an operational decision that should not be interpreted as a significant change in how they view the economy, policy stance. But you cannot escape the fact that it has a little bit of hawkish cue to it,” said Stefan Koopman, senior market economist at Rabobank.

“This makes the situation at the Fed even more interesting. The market’s speculation on a Fed taper has already been assumed as in August.”

After rising more than 9% year-to-date on optimism about a stronger economic reopening from pandemic-driven recession last year, the FTSE 100 has traded in a tight range since April on concerns central banks might pull their monetary support sooner than expected as inflation rises.

Meanwhile, Scotland was voting in a parliamentary election that could trigger a showdown with British Prime Minister Boris Johnson over a new independence referendum that might result in the break-up of the United Kingdom.

Britain’s largest homebuilder Barratt Developments added 2.1% after it forecast wholly-owned annual home completions ahead of its previous estimates, as the sector benefits from government measures and low interest rates.

(Reporting by Devik Jain and Shivani Kumaresan in Bengaluru; Editing by Uttaresh.V and Shailesh Kuber)