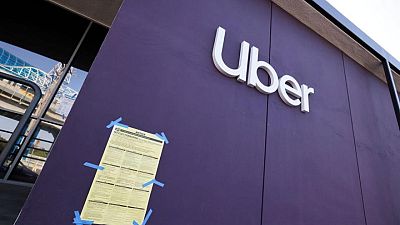 <p><body> <p>By Tina Bellon and Akanksha Rana</p> <p>(Reuters) -Uber Technologies Inc signaled it would pay drivers more to get cars back on the road as the U.S. economy recovers from the pandemic and disclosed a $600 million charge to provide UK drivers with benefits, a sign of the potential costs if the United States requires more driver compensation.</p> <p>Shares of Uber were down 4.6% in after-hours trade. The stock fell 3.4% during the regular session after the Biden administration blocked a Trump-era rule affecting gig workers. </p> <p>The cost and speed of business recovery is of paramount interest to investors, and Uber executives on Wednesday said the take rate, the share Uber takes in fees from each ride, would drop from the previous quarter to a 20% range. Taking a lower cut will allow Uber drivers to earn more, but weigh on Uber’s second-quarter mobility revenue and profitability.</p> <p>Atlantic Equities analyst James Cordwell said shares fell after hours because of the pressure on the take rate and implicit driver incentives.</p> <p>The food-delivery business continued to grow in the first quarter, but ride-hail bookings were flat from the previous quarter.</p> <p>Moreover, the ride-hailing mobility business had to absorb a $600 million hit to account for a settlement with its more than 70,000 UK drivers and provide them with more benefits.</p> <p>“The company’s bottom line has been hurt by the ruling in the UK which raised expenses and reminded investors that a similar move in the U.S. could have a much bigger impact,” said Haris Anwar, senior analyst at Investing.com.</p> <p>Uber posted an adjusted $359 million first-quarter loss before interest, taxes, depreciation and amortization – a metric that excludes one-time costs, including stock-based compensation, narrowing losses by nearly $100 million from the previous quarter. </p> <p>Analysts on average had expected the company to report an adjusted <span class="caps">EBITDA</span> loss of around $452 million, Refinitiv data showed.</p> <p>Uber has promised to be profitable on that metric by the end of the year, three months after its smaller ride-hail rival Lyft Inc, which on Tuesday said it would report sustained adjusted profits starting in the third quarter.</p> <p>Uber’s chief financial officer, Nelson Chai, said on Wednesday the company would become profitable in the “second half of the year,” leaving the door open to achieving profits in the third quarter.</p> <p>Revenue at Uber’s delivery segment, which includes its Uber Eats restaurant delivery business, more than tripled from last year and grew 28% from last quarter to $1.7 billion.</p> <p>Uber’s ride-hail gross bookings, which plummeted over the last year due to the pandemic, remained roughly flat from the last quarter and down 38% from the previous year.</p> <p><span class="caps">SPRING</span> <span class="caps">REBOUND</span></p> <p>Uber’s first-quarter results come as the company reported record food delivery and rides bookings in March and April, as U.S. vaccination rates increased and temperatures warmed. </p> <p>Both Uber and Lyft have struggled to serve the spring rebound in ride-hail trips, when consumer demand temporarily outstripped driver supply, leading to higher prices and longer wait times in some U.S. cities. </p> <p>Uber in April said it would invest an additional $250 million to further boost driver earnings and offer payment guarantees in an effort to incentivize new and existing drivers. Those charges will further drag down second-quarter mobility results.</p> <p>Excluding the $600 million charge, Uber reported $3.5 billion in first-quarter revenue, ahead of an average analyst estimate for $3.29 billion, according to Refinitiv data.</p> <p>Uber and Lyft’s shares took a tumble last week when U.S. Labor Secretary Marty Walsh told Reuters in an interview that “a lot of gig workers should be classified as employees.”</p> <p>Uber Chief Legal Officer Tony West on a Wednesday conference call said the company was hopeful it will have a dialogue with the Biden administration Labor Department that “can ultimately lead to a resolution.”</p> <p>The gig companies rely on low-cost flexible workers and say their services would become unavailable if workers were reclassified as employees.</p> <p> (Reporting by Tina Bellon in Austin, Texas, and Akanksha Rana in BengaluruEditing by Peter Henderson and Matthew Lewis)</p> </body></p>