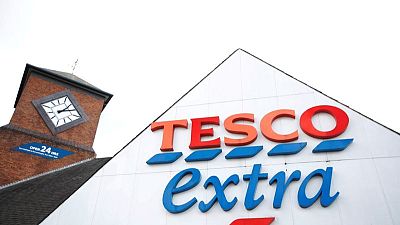 LONDON (Reuters) – Supermarket group Tesco has agreed to increase healthy food options at operations in Europe as well as Britain to appease investors who had filed a landmark shareholder resolution to force the issue.

The coalition of Tesco activist investors calling for Britain’s biggest supermarket group to set targets to sell a greater proportion of healthy food withdrew their shareholder meeting resolution on Wednesday after the company’s pledge.

Investment group ShareAction co-ordinated the February filing of the resolution by institutional investors including Robeco, J O Hambro and the Guy’s and St. Thomas’ health charity, as well as 101 individual Tesco shareholders.

The move represented the first health-based shareholder resolution filed at a UK-listed company.

It initially prompted Tesco, which has a 27% share of the UK grocery market, to commit to increase sales of healthy products from 58% to 65% of total sales in its UK and Irish stores by 2025.

However, ShareAction kept its resolution on the table to encourage Tesco to take similar steps with its Central European stores and its Booker wholesale subsidiary, which supplies supermarket chains Budgens and Londis.

Given that Tesco has now agreed to do this, ShareAction has withdrawn the resolution.

It said a two-year process of engagement has now been agreed between Tesco, ShareAction and investors in the Healthy Markets Coalition, with Tesco implementing new commitments covering 52 billion pounds ($72 billion) of revenue.

“By filing a shareholder resolution, our investor coalition sent a strong message to Tesco and to other supermarkets that shifting sales toward healthier options is important.”

Tesco said it shared the same goal as ShareAction to make it easier for customers to eat more healthily.

“These new commitments will ensure that every customer – wherever and however they shop with us – will have even greater access to affordable, healthy and sustainable food,” said Sarah Bradbury, Tesco’s group quality director.