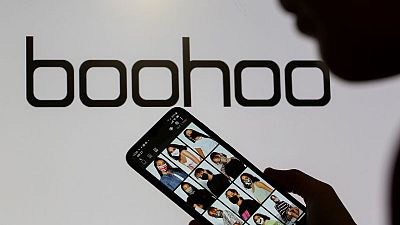 LONDON (Reuters) -British online fashion retailer Boohoo reported a 37% jump in annual core earnings, benefiting from the rise in digital shopping during the COVID-19 pandemic and weathering the negative publicity over its supply chain failings.

In September, Boohoo accepted all the recommendations of an independent review that found major failings in its supply chain in England after newspaper allegations about working conditions and low pay in factories in the Leicester area.

The group, which sells clothing, shoes, accessories and beauty products aimed at people aged 16 to 40, pledged to fix the problems with its ‘Agenda for Change’ programme. In March, it revealed a major consolidation in its list of British suppliers.

Boohoo made adjusted earnings before interest, tax, depreciation and amortisation (EBITDA) of 173.6 million pounds ($241.4 million) in the year to Feb. 28, exceeding analysts’ average forecasts and the 126.6 million pounds made in the 2019-2020 financial year.

Unlike rivals that rely on stores which had to shutter for several months during coronavirus lockdowns, Boohoo was able to trade throughout, helping push revenues up 41% to 1.75 billion pounds.

“We’ve had extremely strong customer retention through the period. That’s very reassuring,” finance chief Neil Catto told Reuters. “But I think customers appreciate all the work we’ve done on the Agenda for Change and the progress we’ve made there.”

In January, Boohoo purchased the Debenhams brand out of administration for 55 million pounds and in February bought the Dorothy Perkins, Wallis and Burton brands from the administrators of Arcadia for 25.2 million pounds.

Boohoo forecast revenue growth for the 2021-2022 financial year of about 25%, with the newly-acquired brands expected to deliver five percentage points of this growth.

It said trading in the first few weeks of the new financial year had been “encouraging” as pandemic restrictions eased.

But it cautioned that the economic outlook remained uncertain and it expected the benefits from reduced returns over the last 12 months to begin to unwind this year, while still experiencing significantly higher carriage and freight costs.

It said core earnings would likely be more weighted to the second half, reflecting a strong comparative in the first half.