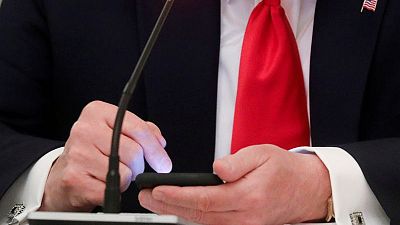 (Reuters) – Facebook’s independent oversight board on Wednesday will announce whether it is overturning the company’s suspension of former U.S. President Donald Trump’s account. The long-awaited ruling will bring the focus back onto how the world’s largest social network decides what world leaders and politicians can and can’t say on their platforms.

Here is how big tech companies deal with this thorny issue:

Facebook defines politicians as candidates running for office, current office holders and many cabinet appointees, along with political parties and their leaders. Twitter’s public interest rules https://help.twitter.com/en/rules-and-policies/public-interest apply to verified government or elected officials, their appointed successors and candidates, registered political parties or nominees for public office that have more than 100,000 followers.

Twitter says it errs on the side of leaving content up when it is in the public interest, including keeping a record to hold leaders accountable. It also allows leaders to interact with other public figures and engage in “foreign policy saber-rattling.”

Facebook exempts politicians’ posts and paid ads from its third-party fact-checking program, though it did start affixing some separate labels, for example, notices about voter fraud rarity on some of Trump’s posts around the election.

The company’s “newsworthiness exemption” also allows politicians’ rule-breaking posts on the site if the public interest outweighs the harm. (https://bit.ly/3aY0RN2)

Facebook, which had occasionally removed Trump’s content for violations like COVID-19 misinformation before he was banned, faced employee backlash for its inaction on inflammatory posts including one during anti-racism protests that said “when the looting starts, the shooting starts.”

Alphabet Inc’s YouTube says it does not have different rules for world leaders, though its exception for “educational” or “documentary” content does allow certain news coverage of politicians making rule-breaking statements.

After the Capitol riot on Jan. 6, Twitter banned Trump for breaking its “glorification of violence” rules, departing somewhat from precedent to take possible interpretations of his tweets into account.

Facebook blocked Trump’s accounts on its platforms indefinitely. CEO Mark Zuckerberg said the current context meant the risks of allowing him to use the service were “simply too great.”

A slew of online platforms barred the former president, including Snapchat, which had already removed him from its Discover program, and Amazon-owned Twitch, which had previously suspended him for hateful content in June.

YouTube also gave Trump’s channel its first-ever strike following the riot. This would normally come with a week-long suspension but the account remains frozen months later. YouTube CEO Susan Wojcicki said the suspension will be lifted when the company determines the risk of real-world violence has decreased.

Human rights groups have argued that the tech firms need to apply standards consistently to other global leaders.

Facebook’s suspension of Trump followed bans in recent years of some government officials, including in India and Myanmar for promoting violence, but the company had never before blocked a current president, prime minister or head of state.

Leaders who have drawn particular public scrutiny but remain active on social media sites include Iran’s Supreme Leader Ayatollah Ali Khamenei, who has used Twitter to call for Israel’s elimination and Brazil’s President Jair Bolsonaro, who has posted on Facebook that indigenous citizens were “evolving” and becoming more human. (https://reut.rs/3gWRnW1)

In March, Facebook put a 30-day freeze on Venezuelan President Nicolas Maduro’s page for spreading COVID-19 misinformation. Both Maduro and Bolsonaro have previously had content removed by Facebook and Twitter for this reason during the pandemic.

Earlier this year, Facebook banned the Myanmar military from the site after they took power in a coup. U.N. human rights investigators have previously said the platform played a key role in fomenting violence in Myanmar.

Both Facebook and Twitter have called for input on their rules after facing intense scrutiny over their handling of U.S. presidential election and the storming of the Capitol by pro-Trump supporters.

Facebook has asked its oversight board to give recommendations along with the Trump decision, while Twitter opened a public survey.