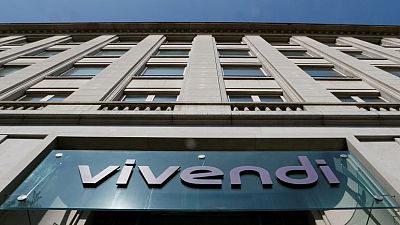 MILAN (Reuters) -Mediaset and its second-largest investor, Vivendi, on Monday ended years of legal sparring with an accord under which the French group will drastically cut its stake in the Italian broadcaster.

A collapsed pay-TV deal back in 2016 plunged the two media companies into a bitter war waged in courts across Europe, blocking Mediaset’s plans to expand overseas to fend off rising competition in the industry from streaming services like Netflix Inc.

The accord commits Mediaset to paying an extraordinary dividend of 0.30 euro a share in July, while ensuring Vivendi’s backing for the pan-European strategy pursued by the group controlled by the family of former Italian Prime Minister Silvio Berlusconi.

Vivendi had succeeded in blocking the project, but Mediaset last week said it was embarking on a fresh attempt to move its legal base to the Netherlands to seek tie-ups with European peers.

Mediaset, its top investor Fininvest and Vivendi said in a joint statement the French group would vote in favour of the move at a June 23 shareholder meeting.

Before that, Vivendi will also back the axing of a loyalty share scheme that would have strengthened Fininvest’s grip on the broadcaster and which Mediaset last week had offered to ditch in a sign of goodwill.

“Vivendi and Mediaset have entered a good neighbourhood agreement in free-to-air television and standstill commitments for a five-year term,” the companies said.

Under the accord, Vivendi will sell on the market over a period of five years the two-thirds of its 28.8% Mediaset stake which it had been forced to place into an arms-length trust.

The Berlusconi family’s holding company, Fininvest, which already owns a 44% stake in Mediaset, will buy another 5% from Vivendi at a price of 2.7 euros a share.

The group controlled by French billionaire Vincent Bollore has invested 1.26 billion euros ($1.52 billion) on its Mediaset stake now worth around 914 million euros.

It will eventually be left with a 4.6% holding which it will be free to sell or keep.

The accord comes after Vivendi scored a string of court victories, regaining full voting rights on its stake and thus power to block any major shareholder moves at Mediaset.

In a further blow to Mediaset, a Milan court last month dismissed a 3 billion-euro ($3.6 billion) damage request from the broadcaster, ordering ordered Vivendi to pay only around 1.7 million euros.

The accord is expected to close on July 22.