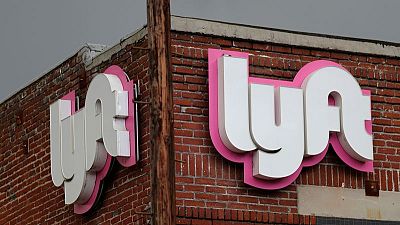 (Reuters) -Lyft Inc on Tuesday surprised Wall Street with significantly lower losses than expected and said it would deliver dependable profit on an adjusted basis beginning in the third quarter thanks to cost cuts that allow the company to earn more per ride.

The results come as Lyft emerges from more than a year of pandemic-related restrictions during which ridership and revenue plummeted. The company said it expected a strong rebound in U.S. travel in the third quarter, when many homebound Americans who hunger for travel are likely to be fully vaccinated against COVID-19.

Shares were up 5.2% at $59 in after-hours trading on Tuesday. Over the previous five days they had lost 11%.

Lyft reported an adjusted $73 million first-quarter loss before interest, taxes, depreciation and amortization – a metric that excludes more than $300 million in one-time costs, including stock-based compensation.

That is significantly narrower than the $144 million loss analysts had projected on average, according to Refinitiv data.

Lyft reaffirmed its goal to be profitable on the adjusted EBITDA metric in the third quarter of this year and said it would remain profitable beyond that time, even as the company invested in future growth opportunities.

Lyft President John Zimmer said Lyft would take advantage of its leaner cost structure to make more money per rider as passengers return to the platform in greater numbers in the coming months.

Zimmer also played down the threat of federal regulation that would turn most ride-hail and food-delivery workers, who currently are independent contractors, into employees.

Lyft had recently pulled forward its profitability goal by three months when it announced the sale of its self-driving technology business for $550 million.

Lyft’s larger rival, Uber Technologies Inc, has projected profitability on an adjusted basis by the end of 2021. Uber is scheduled to report results on Wednesday afternoon.

On a net basis, Lyft’s loss widened to around $427 million, driven by high stock-based compensation costs as the result of the company’s public listing more than two years ago.

Lyft has drastically slashed costs during the pandemic when ridership plummeted and it continued to cut expenses in the first three months of 2021, even as riders gradually returned.

Total costs in the first quarter decreased by more than $344 million and overall, Lyft has slashed nearly $2.5 billion in costs since the beginning of last year.

Zimmer said the company also expected incentive spending for drivers to increase in the coming months, but executives during a conference call said those incentives were covered by the higher prices riders currently pay in many cities as demand temporarily outstrips supply.

The number of active riders in the first quarter rose more than 7% from the last three months of 2020, but ridership still remains around 36% below last year.

Executives said they expect trip demand, particularly leisure and airport travel, to ramp up significantly in the third quarter.

But as business gradually returns, Lyft and its gig-economy peers in the ride-hail and food-delivery industry face regulatory pressure under the new administration of U.S. President Joe Biden, who campaigned on the promise of delivering benefits to gig workers by turning them into employees.

The shares of the companies took a tumble last week when U.S. Labor Secretary Marty Walsh told Reuters in an interview that “a lot of gig workers should be classified as employees.”

The companies rely on low-cost flexible workers and say their services would become unavailable if workers were reclassified as employees. They say surveys show the majority of their workers do not want to be employees.

Zimmer on Tuesday played down the risks of federal regulation, saying a labor bill supported by U.S. Democrats faced tough odds of passing in Congress.

He said the company instead was focused on adopting compromise regulation on the state and local levels, modeled after a November gig industry-sponsored California ballot measure that cemented ride-hail and food delivery workers’ status as contractors, but provided them with some benefits.

“I honestly believe that we will continue to see common-ground, practical solutions that balance independence for drivers … with additional benefits,” Zimmer said, adding that he thinks the federal government will eventually pass guidance that makes it easier for states to adopt compromise regulation.

(Reporting by Tina Bellon in Austin, Texas, and Akanksha Rana in BengaluruEditing by Peter Henderson and Matthew Lewis)