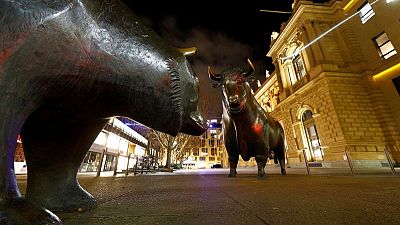 LONDON (Reuters) – Earnings at Europe’s biggest listed companies in the first quarter of 2021 are expected to surge 83.1% from a year earlier, according to Refinitiv I/B/E/S data, as the continent’s economy recovers from the downturn caused by the first wave of the coronavirus pandemic a year ago.

The data, published on Tuesday with the first quarter earnings season in full swing, would mark the best quarter for European stocks since I/B/E/S records began nine years ago and represents a jump compared to last week’s forecast of a 71.3% jump and 61.2% a week before that.

The forecasts, which track companies listed on the pan-European STOXX 600 equity index, point to revenues rising 2.2% in the first quarter, compared to 2.5% a week ago.

Refinitiv said that its data showed that out of 157 companies in the STOXX 600 having reported earnings for the first quarter, 73.9% reported results exceeding analyst estimates, well above the 51% beat achieved in a typical quarter.