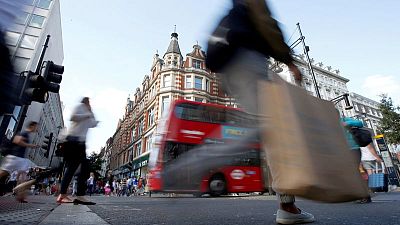 LONDON (Reuters) -Shopper numbers across Britain fell 2% in the week to May 1 versus the previous week, with rain and lower temperatures putting off people from outside locations, researcher Springboard said on Tuesday.

It said shopper numbers, or footfall, fell 6.1% week-on-week on high streets but rose 2.8% in shopping centres and 1.6% in retail parks.

“In part, this is likely to have been due to the rain and cooler temperatures in the second half of the week in a number of areas across the UK which will have deterred shoppers from external locations,” said Diane Wehrle, insights director at Springboard.

Springboard said footfall in all British retail destinations was down 25.9% versus the same week in 2019.