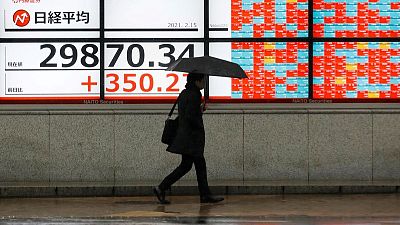 NEWYORK/LONDON (Reuters) – Gold prices rose and a gauge of global equity markets closed not far from a record high on Monday as investors bet corporate results and U.S. data will underscore the strength of the economy’s rebound from pandemic-induced shutdowns.

The dollar eased against a basket of currencies as the yield on Treasury bonds retreated on data showing U.S. manufacturing activity grew at a slower pace in April.

A slide in high-flying tech and related stocks – including Amazon.com Inc <AMZN.O, Tesla Inc and Salesforce.com Inc. – pressured the Nasdaq, as growth-oriented shares slid and cyclical stocks sensitive to the recovery rose.

Earnings for S&P 500 companies are expected to rise 46.3% in the first quarter year-over-year, almost double the rate forecast at the start of April, Refinitiv IBES data shows.

Of the 303 companies that have reported so far, 87.1% have beat analyst estimates, or more than 20 percentage points above the long-term average, Refinitiv said.

But some economists think businesses may be getting ahead of themselves and are being influenced more by the success and speed of COVID-19 vaccination rollouts.

“The data has been unrealistically strong in recent months – while the underlying economy is performing very well, manufacturing growth is not quite at the stratospheric levels the surveys imply,” said UBS economist Paul Donovan.

A busy week for U.S. economic data is expected to show resounding strength, particularly for the ISM manufacturing survey and April payrolls.

Cryptocurrency ether scaled a new record high of $3,342.81 as investors bet on increased adoption. Its 2021 gain of 356% has eclipsed that of bigger rival bitcoin.

Oil rose more than 1% as Chinese economic figures and the U.S. vaccination rate pointed to a strong rebound in demand in the world’s two largest economies.

(Reporting by Herbert Lash; additional reporting by Wayne Cole in Sydney and Yoruk Bahceli in Amsterdam; editing by Will Dunham, Lisa Shumaker and Jonathan Oatis)