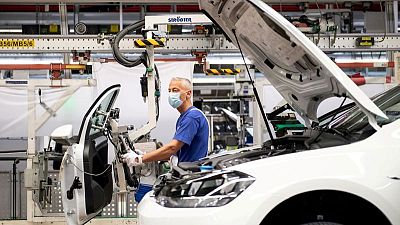 IHS Markit’s Final Purchasing Managers’ Index (PMI) for manufacturing, which accounts for about a fifth of the economy, reached 66.2, slightly lower than a flash reading of 66.4 but still close to March’s record high reading of 66.6.

Factories in Europe’s biggest economy have been humming along during the pandemic almost undisturbed by the related lockdowns, and activity accelerated early this year on strong demand from the United States and China.

“A second consecutive record increase in backlogs of work underlines the strength of demand faced by German manufacturers, but it also highlights the fact that production continues to lag behind new orders,” said Phil Smith, principal economist at IHS Markit.

He added: “The data show that goods producers have redoubled efforts to expand capacity, with April seeing a notable acceleration in the rate of job creation to the fastest in more than two-and-a-half years, but supply issues remain a risk to the sector’s growth prospects.”

Shortages of raw material and components like chips are creating headwinds for manufacturers, especially those in the automotive industry.

“Despite showing some concerns for the current supply issues, manufacturers generally maintain a strongly positive outlook for the year ahead with expectations at a record high, hinting they believe the bottlenecks to be transitory and that conditions on both the demand and supply side will get better,” said Smith.