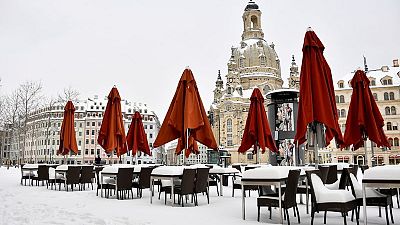 By Paul Carrel and Andreas Rinke

BERLIN (Reuters) – The reprieve is over. A year-long waiver on insolvency filings has ended in Germany and there are already signs that bankruptcies are starting to pick up in Europe’s largest economy.

Germany introduced the waiver last March, when the COVID-19 pandemic hit, part of a package of measures aimed at supporting businesses but which gave rise to the charge that the government was simply propping up “zombie companies” with no future.

Insolvencies duly fell. But since October, Berlin has phased out the waiver. This year only firms awaiting state aid provided since November were exempt from filing – until now. Monday is the first business day that exemption no longer applies.

That is welcome news to local critics who say the fall in insolvencies is proof in itself the state has done more than enough and now risks impeding what economic liberals hail as “creative destruction”, the term popularised in the 1940s by Austrian economist Joseph Schumpeter to describe unviable firms folding to make way for more dynamic newcomers.

The latest official numbers, for January, show corporate insolvencies down 31.1% on the year at 1,108. But the phase-out of the waiver from October has yet to show in the data as cases make their way through the courts, the Statistics Office said.

The headline numbers also belie a rise in insolvency proceedings opened, which give an indication of the future path of actual insolvencies.

In November of last year, a month after the phase-out of the waiver began, there was a 5% rise in these proceedings after a steady fall earlier in the year, a Federal Statistics Office tally of notices from local courts in Germany shows.

The number of proceedings opened rose by 18% in December, before dipping 5% in January and then rising by 30% on the month in February, and by 37% in March.

The European Union’s top economic watchdog said last week EU governments must step in to avert a wave of insolvencies by healthy companies that are struggling due to the pandemic.

Bankruptcies in western Europe are seen rising by around a third this year compared to pre-pandemic levels as governments withdraw extraordinary support measures such as loan guarantees, raising the spectre of a surge in unemployment and steep losses for banks.

In Germany, the legal policy spokesman of the Social Democrats’ parliamentary group, Johannes Fechner, vowed to try one last time this week to convince their CDU/CSU conservative ruling coalition partners to extend the waiver by two months.

Many companies would otherwise have to file for insolvency because state aid had not yet been paid out, Fechner said.

“These companies got into the crisis through no fault of their own and would be entitled to state aid. Thousands of jobs are on the line, and families’ livelihoods depend on them,” Fechner added.

Industry experts say a retroactive extension would not work.

“If a company has to apply (for insolvency) at the beginning of May, suppliers immediately demand payment in advance, customers jump ship and employees quit. The damage can then no longer be revised,” Lucas Floether, chairman of the Gravenbrucher Kreis group of insolvency administrators, told Reuters last month.

Carsten Linnemann, vice-chairman of the CDU/CSU parliamentary group, said the end of the waiver affected only a small number of companies that had applied for coronavirus state aid and were still waiting for payment.

One person familiar with government estimates said there is “no insolvency tsunami” expected in Germany due to other extensive support measures, including a government-backed ‘Kurzarbeit’ shortened hours facility.

The end of the waiver comes after the German economy contracted by a greater than expected 1.7% in the first quarter as a lockdown in place since November to contain the coronavirus stifled private consumption.

But Berenberg Bank economist Holger Schmieding did not expect a rise in insolvencies to delay an economic rebound, as robust global demand and the reopening of the domestic service economy would matter far more.

“Against that backdrop, a temporary spike in insolvencies will have no significant impact on overall business and consumer confidence and spending,” he said.